Here is a report from the scene:

“There were around a dozen of us at the (Bill) Ayers event. 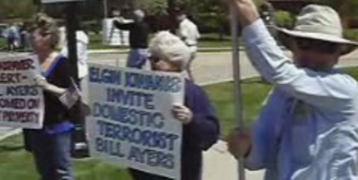 “Quite a few reporters came and asked questions and a couple of what looked like some ‘students’ of Ayers were taking pictures.

“I guess they said it was justified for Ayers to be a cop killer because cops had killed some Black Panther in his bed….who expects liberals to make sense!

“Ayers arrived at the event very early, so we didn’t see him.

“Guess he didn’t have the guts to drive by us.

“Hopefully we made some people driving by more aware.”

The Daily Herald’s story is here.

Among the comments was:

The photo is from a video found on Midwest Conservatives.