The Daily Herald doesn’t call it a scandal, but it is. 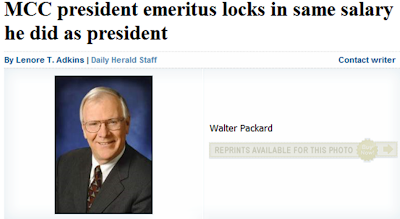 Lenore Adkins has written a story about how gone, but not done gone, ex-McHenry County College President Walt Packard is still being paid what he was when he was working full-time—over $200,000 a year until June 30, 2010, and family health benefits through August 21, 2012.

“”I understand people get upset, but we’ve got better things to do right now,”

Options the board had?

“I’m not sure anymore. It’s a difficult situation when you get into them, there’s choices you make. We’ve tried to make the least onerous choice and we’ve done that.”

Donna Kurtz, who voted with the rest of the board for the deal, added,

“I think what is upsetting to people is they just want to understand the (personnel) issues and that’s part of what’s happening right now.”

Show us the ex-junior college president’s contract and give us your reasons why this isn’t a waste of our money.