Until I read it in Sun-Times columnist Mark Brown’s column today, I didn’t realize that the Cook County sales tax fight is racial.

Talking about the possibility of a veto, Brown writes,

“That’s unlikely given the current split, now breaking down along racial lines. All the African-American commissioners either backed Stroger or voted present, while all the white commissioners opposed him.

“The two Hispanic commissioners split, with Joseph Mario Moreno backtracking from his earlier vote to repeal the tax increase, which was a flip-flop from his original support for the tax.” 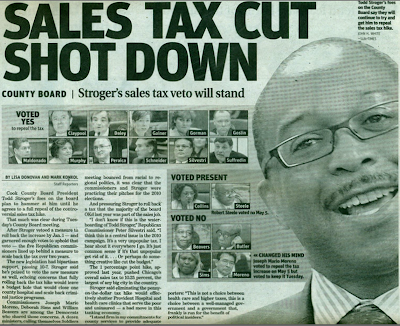 At least that’s the way it appears when one looks at the article on the facing page. (Click to enlarge.)

Take a look at the faces voting to repeal Todd Storger’s sales tax.

They are all white.

Stroger’s supporters are all African-Americans, except one.