McHenry County Blog has previously written about newly sworn-in Grafton Township Trustee Gerald McMahon’s argument that borrowing over $5 million to build a new town hall is really not worth talking about.

He argued that the size of the township hall’s cost in comparison with the rest of people’s property tax bills was like comparing a meerkat to an elephant.

I have discussed how bad this analogy is from both my son’s—the meerkat lover’s—viewpoint and suggesting taxpayers should be hunting the Republican Party’s symbol. After all, every member of the Grafton Township Board is a Republican.

Yesterday, I explained how seeking to force Grafton Township taxpayers to pay an additional $5 million was the direct result of

Taxing to the Max

That is not what I want to see in elected officials who profess to be Republicans.

Speaking of which, I missed writing a story on the 325th day since Mayor Aaron Shepley’s 75% city sales tax hike took effect. That was three days ago. Shepley, you may remember, is a Republican precinct committeeman in his neighborhood and was appointed vice chairman of “Community Outreach” by McHenry County Republican Party Chairman Mike Tryon. (No, I won’t make a comment about how he and the all-Republican Crystal Lake City Council–except Jeff Thorsen–are reaching into Crystal Lake shoppers’ pockets every day.)

I continue to think that is such a strange message to send.

But back to the meerkats and elephants.

I suggested yesterday that McMahon’s argument is one that could and should be made in a referendum campaign.

But McMahon and the other township trustees obviously don’t trust the voters.

Otherwise they would instruct the Township Clerk Dina Frigo to file the citizen petition requesting one with the McHenry County Clerk. 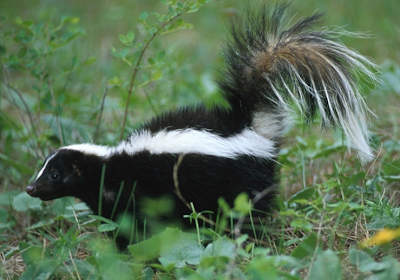 And, that leads to the skunk.

The skunk stinking up the Grafton Township political arena is the refusal of the township board majority’s to seek voter approval before bull elephanting ahead.

A skunk is about the same size as a meerkat.

And, if you had a skunk in your home, you’d want to get rid of it.

The evidence of voter dissatisfaction of the way the township officials are trying to shove this township office building through without a referendum is contained in the defeat of Township Supervisor John Rossi by Linda Moore.

While Moore only won the Republican primary election by 30 votes, her efforts did elect McMahon, whether he wants to admit it or not.

Having 50% of one’s electorate dissatisfied with what one is doing—or at least the way one is doing it—should be enough to convince any rational set of public officials to change direction.

At least as far as giving their voters a say at the ballot box.

To ignore this skunk could have repercussions that township officials, whether in Grafton Township or nearby, might live to regret.

It is possible to abolish township government through a citizen-initiated referendum.

If someone contacts an attorney to draw up a township abolition petition and, then, gets 500 signatures, in the present “in your face” atmosphere epitomized by Gerry McMahon’s performance Thursday night, Grafton Township government could be toast.

And someone’s political career, based on stopping waste in government, would be launched.

This is a perfect opportunity for local Democrats, but I’m not willing to bet that they will pick up the ball and reach the County Clerk’s filling goal line.

= = = = =
The skunk was found on the Illinois Department of Natural Resources web site. Gerry McMahon’s picture was taken while he was trying to convince annual town meeting electors to vote to approve a new township building.

Other articles in this series:

The Skunk, the Meerkats and the Elephant – Part 1

The Skunk, the Meerkats and the Elephant – Part 2