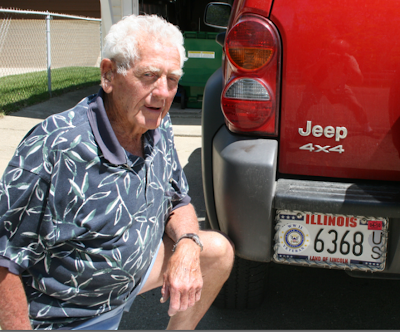 What you see on the car is a World War II license plate.

More important is the man next to it.

His name is Sully (Don) Sullivan.

He lives in Wonder Lake and is a buddy of my father-in-law Vince Giangrasso.

Both spent the war in the Pacific. Because he could type, Vince spent most of the war as a supply clerk, then sergeant, in Hawaii, luckily for the family tree. Not many of the buddies he went in with came back. 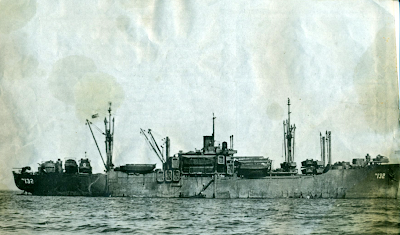 Sully was a pharmacists mate on the USS Barnwell setting up MASH facilities for those making the hard landings.

“It wasn’t anything like on TV,” to put it in his words.

He lent me his photo trove and you’ll be seeing some it as we approach the REAL Memorial Day.

But let me add one more thing Sully told me last week.

He was selling poppies on Thompson Road and raised a lot of money.

A young woman stopped her car and said,

“Thanks for what?” Sully replied.

“Thank you for serving our country,” she replied.

“You know,” Sully told me, “That was the first time in 50 years anyone has thanked me.”

So, when you see a Vet today, regardless of what war, thank him or her.

I think it’s probably been sixty, not fifty years since Sully was mustered out, but whose counting?