CHICAGO – Chicago Ald. Isaac S. Carothers (29th Ward) and a real estate developer who sought to transform a 50-acre former rail yard and industrial site on the city’s west side into a residential and commercial neighborhood, were indicted today on federal fraud and bribery charges, announced Patrick J. Fitzgerald, United States Attorney for the Northern District of Illinois.

The developer, Calvin Boender, allegedly paid for approximately $40,000 in home improvements to Carothers’ residence and provided him with meals and tickets to professional sporting events, which Carothers allegedly illegally accepted, in exchange for Carothers’ official acts supporting successful zoning changes for Galewood Yards, which was the largest undeveloped tract of land within the city limits.

Approximately $6 million more was made from the sale of 25 acres of the land than would have been realized without the zoning changes, and Boender allegedly personally profited half of that amount, or approximately $3 million, according to an 11-count indictment returned by a federal grand jury today.

Carothers, 54, also known as “Ike,” who was first elected alderman of the city’s 29th Ward on the far west side in 1999, and Boender, 54, both of Chicago, will be arraigned at a later date in U.S. District Court. 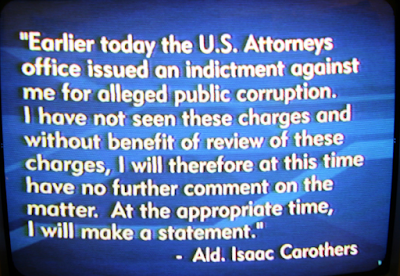 “Using public office to obtain personal financial benefits violates the public trust and we will continue to vigilantly investigate and prosecute both corrupt public officials and businessmen who seek to profit by corrupting them,”

According to the indictment, Boender was at least a part owner of several companies, including Grand Central Center for Business, LLC, of Elmhurst, which purchased the Galewood Yards site in 2000.

Between 2004 and at least February 2007, Boender and Carothers allegedly participated in a scheme to defraud the City of Chicago and its residents of Carothers’ honest services by accepting financial benefits in connection with official acts to advance Boender’s financial interests in the development of Galewood Yards.

The commercial and residential development today consists of a 14-screen movie theater, a Laborer’s Union Training Center and 187 single-family and multifamily residences in a neighborhood known as Galewood Crossings. 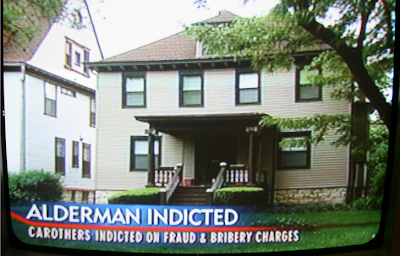 Between June and September 2004, Boender allegedly paid for approximately $40,000 in home improvements for Carothers, including exterior and interior painting, and installing new windows, new exterior doors, and a central air conditioning system.

Boender directed unnamed Individual A, a general contractor who worked for Boender, to provide the home improvements without requiring Carothers to pay for them.

In addition, Boender paid for meals for Carothers and provided him with free tickets to several professional sporting events, including sky box tickets to at least one Chicago White Sox playoff game in 2005, the indictment alleges. 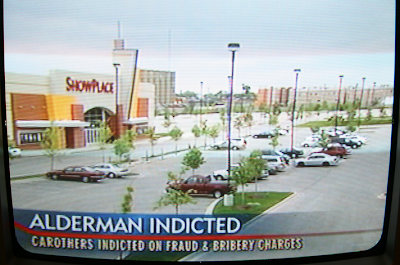 On Sept. 1, 2004, Boender caused Grand Central Center to file a zoning amendment application that would allow Galewood Yards to be developed entirely for residential and commercial use. In an attached disclosure statement, Boender allegedly falsely stated that he had not bribed or attempted to bribe a city official in the past five years, when he knew that he had bribed Carothers with the home improvements in exchange for Carothers’ support of zoning changes for Galewood Yards.

The indictment alleges that throughout 2004 and 2005, Carothers met with city officials, including employees of the Department of Planning and Development and other high-ranking officials, in an attempt to stop them from designating Galewood Yards as part of a Planned Manufacturing District (PMD), which would have prohibited Boender from developing the property for residential, commercial and mixed uses.

As part of the fraud scheme, Boender met with a high-ranking city official in an attempt to have that official support a residential and commercial re-zoning of Galewood Yards, representing to that high-ranking official that Carothers supported Boender’s proposal, the indictment alleges.

After the Planning and Development Department continued to support making Galewood Yards part of a PMD, Boender and Carothers negotiated a compromise in which the department supported a plan to re-zone Galewood Yards to allow approximately 15 acres to be developed for residential use and approximately 10 acres for commercial use. The indictment alleges that this plan allowed Boender to enter into separate contracts:

On Feb. 16, 2006, Carothers signed an official letter to the Planning and Development Department stating that he had reviewed and had no objection to Boender’s planned development for Galewood Yards. Carothers also allegedly introduced, supported and voted in favor of City Council ordinances that amended zoning of Galewood Yards to allow for portions to be developed for manufacturing, commercial and residential uses. The indictment alleges that he took the following official actions to obtain zoning changes while failing to disclose publicly his financial relationships with Boender and failing to recuse himself from Galewood Yards matters that were pending before the City Council:

To disguise and conceal the extent of Grand Central Center’s campaign contributions to Carothers, Boender allegedly directed an employee to make a $1,500 donation to Carothers’ New 29th Ward Democratic Organization and reimbursed the employee for the contribution.

The indictment further alleges that when Carothers asked Boender for his financial support of Candidate A, a relative of Carothers’ who was running for Congress in 2004, Boender curried favor with Carothers by making campaign contributions in excess of the $2,000 maximum allowed under federal election law.

To disguise and conceal contributions to Candidate A, Boender directed at least two individuals to make $2,000 straw donations and reimbursed them for their contributions.

The two campaign finance counts were initially brought against Boender in late February but that indictment remained sealed while the investigation was continuing until today when the superseding indictment was returned.

One obstruction of justice count against Boender alleges that in August 2007, knowing that a federal investigation of Boender’s financial relationship with Carothers was being conducted, Boender advised Individual A to provide a false version of events in any grand jury testimony about home improvements that Individual A had performed on Carothers’ home.

A second obstruction count alleges that in February 2008, Boender created a document that purported to be an invoice to Carothers, dated Sept. 8, 2004, knowing that no such invoice existed from that time.

The allegedly false invoice purported to bill Carothers for the home improvement work, and Boender allegedly attempted to cause the false invoice to be produced to the grand jury to corruptly influence the investigation.

The tax count against Carothers alleges that he filed a false individual federal income tax return for 2004, stating that he had total income of $144,281, and taxable income of $86,836, while knowing that those figures failed to include the additional gross income he received in the form of home improvements that were paid for by Boender.

The government is represented by Assistant U.S. Attorneys Brandon Fox and Manish Shah.

If convicted, Carothers and Boender each face a maximum penalty of 20 years in prison on each of the four counts of mail or wire fraud, and 10 years in prison on one count of bribery against each of them. Boender faces a maximum of 10 years in prison on each of two counts of obstruction of justice, and Carothers faces a maximum of 3 years in prison for filing a false tax return. Also, all of those counts each carry a maximum fine of $250,000 fine. The two misdemeanor campaign finance counts against Boender each carry a maximum penalty of a year in prison and a $100,000 fine. If convicted of the tax count, Carothers would be assessed mandatory costs of prosecution, as well remain liable for any back taxes, interest and penalties owed. The Court, however, would determine the appropriate sentence to be imposed under the advisory United States Sentencing Guidelines.