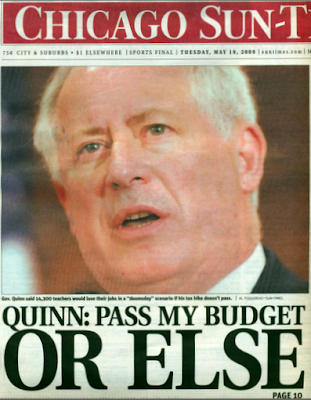 Apparently I missed some tension while having dinner at the Crystal Lake Country Club.

I admit to raising the body temperatures of some club members by asking if they were ready to pay a 6.25% state sales tax on their membership fees.

Now the Chicago Sun-Times is reporting,

Republicans voted against the bill. 25 Democrats did, too.

The article does not point out that the state income tax would have risen 50% under the legislation.

Is the next move “pass my budget or else,” Governor Quinn’s so-called “Doomsday Budget“?

It seems to me that House Democrats have decided to try to force Republicans to vote for whatever tax increase they eventually want to pass.

But, since the Dems have a veto-proof majority in both houses, every Republican who votes for such a tax hike will let a Democrat off the hook come election time. I hope there are any such weak sisters.