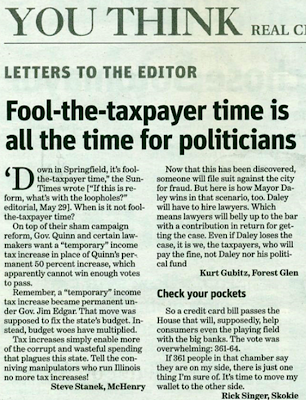 That move was supposed to fix the state’s budget. Instead, budget woes have multiplied.

Tax increases simply enable more of the corrupt and wasteful spending that plagues this state. Tell the conniving manipulators who run Illinois no more tax increases!

The letter from Skokie’s Rick Singer isn’t bad either. Click to enlarge.

= = = = =
The snake oil salesman is from a 50-year old cartoon on YouTube, “Make Mine Freedom,” a “Moving Minutes” Production by John Sutherland for the Extension Division of Harding College. It’s a defense of capitalism.