I got a request for a biography of my father and worked on it well into two nights.

It isn’t finished yet, but my younger sister Jan, a special ed teacher near Baltimore, has come up with some memories that I want to share on our father’s birthday, which is today, June 8th. Dad was born in 1916 and died in 1989. Jan wrote this Sunday.Thanks for the opportunity of reflecting on what a great Dad we had. 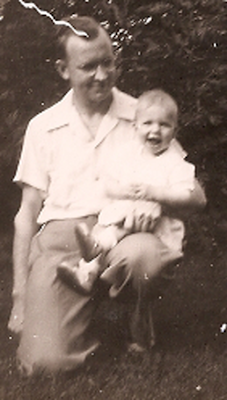 I was in church this morning and the minister was talking about how unusual it is in the Bible to talk about God as our Father.

So, I was remembering Dad and how having a dependable father made it easy for me to trust in God the Father. (Baby Jan and her father to the left.)

I remember in 8th grade Dad lost his job because the company, National Chinchilla Breeders of America, a trade association, was having some financial troubles and decided to lop off the highest paid person, the executive secretary, Dad.

I have often recently marveled that I never felt like this was a tragedy or that my life would change because of this. I just assumed he would get more work and that life would go on, which it did.

But I am pretty sure that today kids in the 8th grade are suffering anxiety if their fathers lose their jobs.

I realize it isn’t the same economy as it was in 1957, but I am so grateful that Mom and Dad didn’t put that adult worry on us kids. Thanks, Dad.

My brother-in-law Denny Desmond did my father’s taxes. He has often marveled that Dad didn’t make that much money, but managed to send us three kids through college without burdening us with college loans, keep a boat, etc. etc. on a modest income with one family earner. 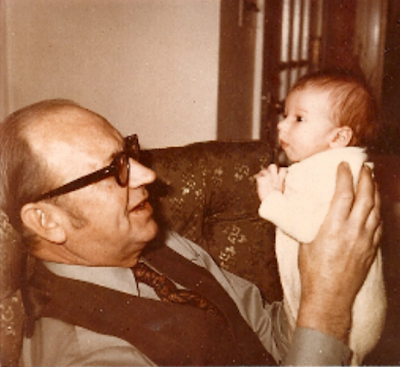 I remember him buying milk at the gas station to save money.

I remember him always eating hot dogs and baked beans at Howard Johnson’s on trips.

I think he did like them, but I also think that his main motivation was to save money.

The rest of us had clams or something else. I am frugal myself, probably because of his example.

When Mike (Peters) was in seminary I made a corduroy jacket for my eldest girl (Newborn Elizabeth above in her grandfather’s arms) out of an old red robe. It felt good to “make do.”

I am still using his 1960’s something riding lawn mower.

He would be too.

He went through college as an agricultural major in 3 1/2 years at the University of Maryland and that included a semester off to go work his father’s farm when his dad got sick.

He survived on skim milk (which was going to be thrown away), oatmeal, baked beans (again) and I don’t know what else.

He got a “loan” of sorts from the bank in Sudlersville, MD. One of the directors had noticed that he had potential (and no money) and told Dad that he needed to go to college.

He gave him checks and said to write them when he needed money–that he could pay it back later. Thanks to that person who saw the specialness of Dad and helped him to get ahead.

He started to date my mother again (they were in high school together) after she had graduated from college.

Pop Pop Stevens told him that Eleanor was home and that he should stop by.

When he asked Mother if she would marry him, she said that she would have to think about it. I guess he asked sooner than she had expected.

Anyway, he never brought it up again. 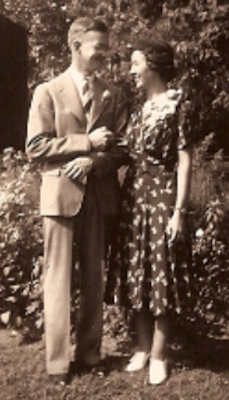 So one day, a week or so later, she said, “Do you remember that question you asked me a while ago?”

He responded that he did not remember it.

He said, “I’d hoped you would have forgotten.”

I don’t know what happened after that.

Mom should have punched him one, but I always tell the grandkids that the scene faded out into a kiss.

(The wedding certificate is above right and a wedding day photo is to the left.)

He never called my Grandmother Stevens anything.

If you are getting married, don’t do this.

Somehow it was never settled what to call her, and so he always waited for eye contact and then talked. I guess Mrs. Stevens was too formal and “Mom” was reserved for his mother.

Anyway, I made sure I got it straight what I was going to call Mike’s parents before the wedding. (Jan and Mike Peters cutting their wedding cake.)

I called them Mom and Dad and never felt that my loyalty to my birth parents was in any danger by sharing the name. I felt close to my in-laws and they to me. 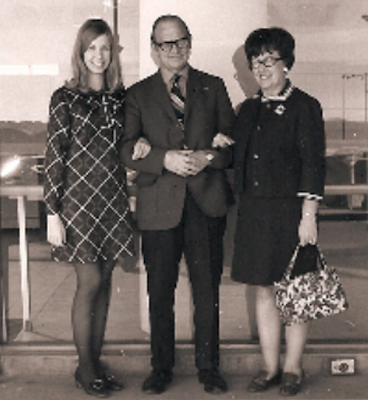 Maybe he called her Mom Mom after the grandkids came. I’m not sure.

I only applied for one job after college.

I just knew that Fort Logan Mental Health Center was going to hire me as a special ed teacher. I felt I was in the will of God.

He said that perhaps I should apply somewhere else, to hedge my bets (reasonable request for a parent who did not want to continue to support me after college).

But I didn’t and I did get hired. He drove out to Denver, Colorado with me to help me get set up in an apartment after I graduated from Michigan State. (Jan with Eleanor and Cal Skinner above.)

I left my contacts in the motel somewhere in Kansas. More were ordered and he didn’t make a big deal out of it. 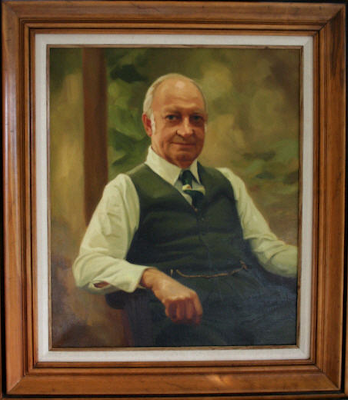 Dad told me once that he was useful on the County Board because he knew how to ask questions.

When he was on the County Board, I remember that the board had people come to present their proposals.

One was about a landfill, I think.

Well, you can have people come before a board, but if the people on the board haven’t done their homework, they won’t know what to ask.

Dad did his homework. He worked hard.

One summer after Mike had moved to Hawaii for the Navy (we were to come in August), I took 11 hours at Northern Illinois towards my Masters in Special Ed.

Mom and Dad watched my girls.

I was really working hard and Dad told me that I was probably doing too much. I really valued that compliment because I knew I was working hard if Dad thought so.

(Below you see Cal and Eleanor Skinner with their granddaughters. Elizabeth and Sarah, Jan’s daughters have the long hair. Ellen’s three are Lissa, bottom right with the pigtails, Heather, bottom left in pigtails, Kelly being held by her grandmother’s right arm. Cal’s daughter Alexandra is being held by her left arm.) 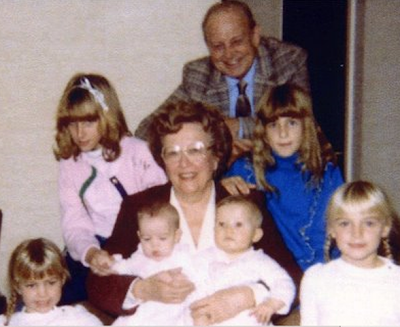 After Mom died Dad went to her grave in Church Hill to “talk” with her.

He was going to drive back to Crystal Lake alone and his eyes were not the best.

I told him that if he had just talked with Mom he knew she would not be in favor of this.

“I talk things over with her, but I don’t always agree with her.”

He had a great sense of humor.

When Mom’s casket went to Dover instead of Baltimore, we talked about how Mom liked to travel. He never lost the twinkle in his eye.

I got to know him more after Mom died than before.

As with many families, the mother was the hub.

But after my husband Mike died and after Mom died, Dad and I discussed things more as peers.

We talked about when to take off the wedding rings.

We talked about moving on in relationships.

It was a precious time.

We discussed what should be on the family tombstone bench (in Church Hill, Maryland) that Mike and I and Mom and Dad would share.

He was fine with Mike’s request,

“For I am not ashamed of the Gospel.”

The other side said,

As we near Father’s Day and Dad’s birthday, June 8, it has been good to reflect up a father who lead by example and was always there for us.

Thanks to Jan’s husband Sudhir Patel for sending most of the photos while Jan was in school.