When I was the Republican Spokesman on the Illinois House Appropriations Committee that handled the budget for the Department of Mental Health and Developmental Disabilities, one of my goals was to get at least 50% of the money into community services.

If you needed supervision, would you rather live in an institution or a home near your family or even at home?

I think the answer is obvious.

It was not until Governor George Ryan appointed Barrington’s Ann Patla director that I got cooperation from the Executive Branch. Patla headed up Pioneer Center before becoming agency head.

One year when I asked my annual question of the budget percentage going to non-institutional care, Patla told me it was over 50%.

“We believe that every individual with developmental disabilities should be given a meaningful choice to live and remain in his or her community,” is in that part of their report, which is below. 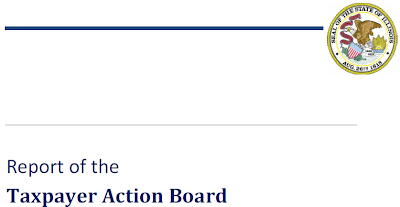 From the June report from the Illinois Tax Review Board, I’m assuming that putting too much money into the expensive institutional part of the care still exists.

Indeed, one of Rod Blagojevich’s key campaign pitches was to keep open or to open institutions like Lincoln Developmental Center whose costs clearly outweighed their benefits. He went from facility to facility holding rallies set up by AFSCME. I ran into one in Canton while campaigning against him for governor on the Libertarian Party ticket in 2002.

Let’s take a look at page 37 and 38 and see what the folks given the task of suggesting budget cuts came up with:

Enhance community options for people with developmental disabilities that are living in State or privately-run institutions:

The Division of Developmental Disabilities (DDD) provides services to adults with developmental disabilities who are living in their homes and communities, or in institutional settings.

Currently, there are 2,385 individuals served in nine State-Operated Developmental Centers (SODCs), which provide residential and program services to those with developmental disabilities needing active treatment programs and intensive supervision.

One of the SODCs, the Howe Development Center, is a de-certified facility, serving approximately 289 adults at an average annual cost per beneficiary of $186,573.

The average cost per individual of the remaining SODCs is $142,533.

In addition, there are over 300 private intermediate care facilities for persons with disabilities (ICF/DD) that are currently serving 5,648 adults at an average annual cost per beneficiary of $57,428.

Both SODCs and private ICF/DDs are certified and operate under the same federal regulations.

There is also a network of Community Integrated Living Arrangements (CILA), in which approximately 200 community-based organizations provide services to 7,240 people with disabilities on a 24-hour basis, at an average annual cost of $53,291. Services provided by these centers include advocacy, peer counseling, skills training, information and referral.

Finally, there are 3,055 people with disabilities that currently receive home-based services at an annual individual cost of $19,852.

All other individuals with disabilities are being served on a Average Annual Per Person Cost Waiver program, in which they receive day services at an average cost of approximately $12,000 per year. (12) 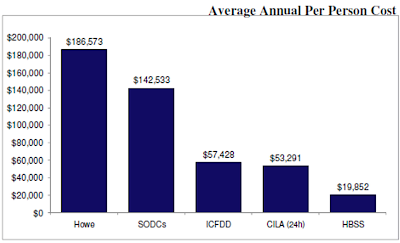 Illinois relies disproportionately on high-cost institutional settings rather than less costly community settings or shared living environments to serve the needs of these individuals.

According to recent state comparisons, (13) Illinois ranks at the very bottom – 51st – out of all states, including the District of Columbia, in serving adults with disabilities in settings of six persons or less.

We believe that every individual with developmental disabilities should be given a meaningful choice to live and remain in his or her community.

Many of the beneficiaries who are currently being served in high-cost institutions in Illinois could be served in the community with quality services at a much lower price.

In 2006, 70.5% of all persons nationwide were supported in living arrangements for six or fewer people – Illinois can take advantage of these best practices to make successful community transitions.

The State should immediately begin pursuing aggressive strategies to reduce the number of individuals with developmental disabilities in institutional care, including:

(12) It should be noted that the CILA, home-based services and private ICF/DD annual costs reflected above do not include pharmacy or other medical services funded through the Medicaid State Plan. The ICF/DD and CILA costs do include some nursing services provided at the residential settings.

Nevertheless, the large disparity in costs associated with private and community services versus those delivered by the State, even after taking into consideration additional Medicaid medical services, clearly supports the TAB strategy addressed below.