Believe it or not, newly-elected Township Supervisor Linda Moore and the four township trustees who resent her having been elected because of the monkey wrench she threw into the $5 million (including interest) new township hall project agreed tonight.

Without discussion, they voted 5-0 to authorize “the return to Harris Bank of the $3,500,000 in loan proceeds with interest to the date of the return in exchange for the cancellation of the Debt Certificates currently outstanding against Grafton Township.”

Of course, Moore didn’t throw the monkey wrench, except by getting elected on the platform that a new township building should not be constructed without voter approval at the ballot box. 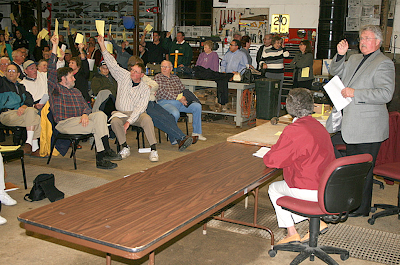 After a contentious annual town meeting at which a tie vote to approve the construction of the new building resulted in the motion’s loss, Judge Michael Caldwell ruled in Dan Ziller, Jr., et al’s suit, that, because of inadequate notice, the effort to build the new township building was dead in the water.