One of our family’s stops on our Western Odyssey was Mount Rushmore. 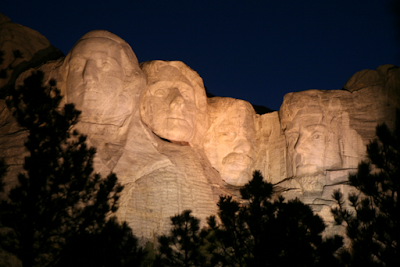 We went for the nighttime presentation.

I was expecting a light show and was disappointed.

The light show I remember as being excellent was in front of Springfield’s Old State Capitol during the 1970’s. The lights bounced around the area highlighting various parts of the Old Capitol, Lincoln’s law office and other places as the narrative indicated.

As the Mount Rushmore program proceeded, I expected spotlights to bounce from Washington to Jefferson to Lincoln to TR as the role of each was described. 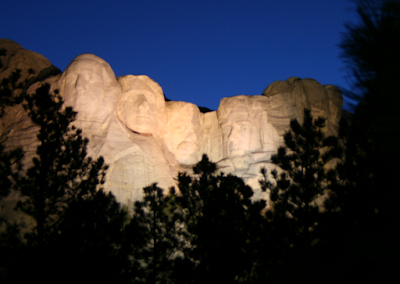 The faces remained in their natural light state until almost the end of the program.

Then all the faces were uniformly lit, as you can see on top.

The narrative talked about presidents after Teddy Roosevelt, but didn’t name any of them.

I listened closely to see of the Barack Obama propagandists had edited what was said.

When I did not hear the word “hope” once, I concluded that that they had not yet done so.

Where will we put Obama’s face?

Tomorrow I’ll reveal the perfect spot that we found late on our vacation.