“Are you running for state rep. again?” I asked.

“I’m going to start gathering signatures at the County Fair.”

For the second election in a row, Kaempfe will be challenging Republican incumbent Mike Tryon, also of Crystal Lake.

Even though Kaempfe drew more votes in the Democratic Party primary election than Tryon did in the GOP contest, he did not in the fall, losing 61%-39%.

“If somebody is running unopposed, you do not have a choice. At the very least I’m giving the constituents in the 64th district a choice.

“Whether they take or not is up to them, but I’m giving them a choice.”

“What issues are you going to stress?” was my next question. 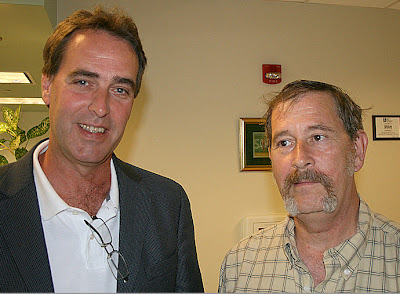 “So you’re not going to take money from lobbyists?” I asked.

“I would take money from unions.”

“Because they are, in fact, representing the working families. They are trying to keep good paying jobs for the average workers,” Kaempfe replied.

“The big money lobbyists have one thing in mind, money, greed, that’s their bottom line.”

“Green energy. That’s where the entire planet has to go. One of the ideas I had and Mike kind of pooh-poohed it last time around, was to pass a bill that with any new construction in the state, estimate the energy it would use and the bill would be that the new house has to produce about 30% of its own green energy–solar, wind, geothermal or a combination of them.” 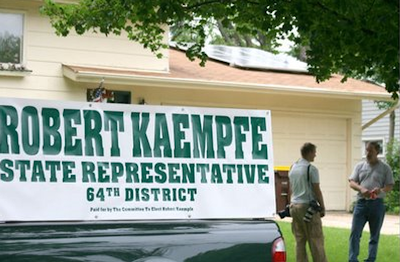 Last year Kaempfe used his installation of solar panels to lead by example.

“With geothermal you only have to go down about eight feet. You dig the foundation level a little deeper and out a little more to put the grid down.

“Another idea I had, at the end of Coventry Lane, there’s a waste water treatment plant.

“Every notice that standpipe they out there? It has a flame on top. It’s burning off methane, a natural byproduct of the process.

“This is real simple. If absolutely nothing else, compress the methane into tanks all spring, summer and fall and you use it to heat the waste water treatment plant during the winter.”

“How is that a state issue?” I asked.

“It is for Crystal Lake.

“Every city, no matter where it is, has methane that could be used to help heat the waste water treatment plant. It would save money.

“All the state legislators get earmarks. Instead of making massive cuts on community services, how about hold off the earmarks?

“Didn’t Algonquin Township get almost a half a million dollars?

“I think that money could have been better spent, if he had to have earmarks, on PADs or Pioneer Center, where people really, really need it.

“I’m just trying to look out for the average person.

“How about all the elected state officials? To show we’re on the side of the people, we’ll take a voluntary ten percent pay cut.

“Why not? They’re making good money.