That’s the number I counted sitting at tables.

There were about 60 at the first meeting.

I continue to believe that spending $137,750 on this project is unmerited. St. Louis referendum tax hike facilitator UNICOM-ARC is the main beneficiary.

There were only two of us at our front and center table. Naturally, we were encouraged to move to tables where there could be more interaction.

One lady invited us over, saying there were too many college people at her table.

So, the number of non-college people and non-members of the organizing committee there were at the tables had to be pretty slim. 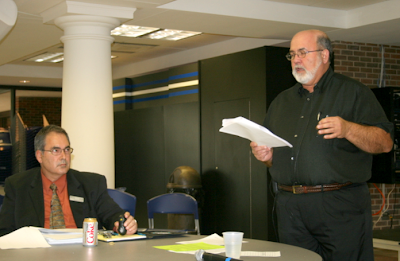 Moderator Steve Weskerna kicked off the meeting. He asked us to pretend we were McHenry County College trustees.

The topic was finances.

Acting CEO Ron Ally, the college’s finance guy this century, gave a power point presentation that I thought unfair at only one point.

You can look at the slide above (click to enlarge any image), which compares

So, from an “issue framing” point of view, I thought the presentation was slanted toward raising taxes.