This is the second part of a three-part article on McHenry County College’s MAP meeting Tuesday. Part 1 in here. The Northwest Herald’s take, complete with shifting headline emphasis, is here.

My notes have “one cent sounds like nothing.” The “referendum” word was used.

“It’s costing the college millions of dollars each year.” 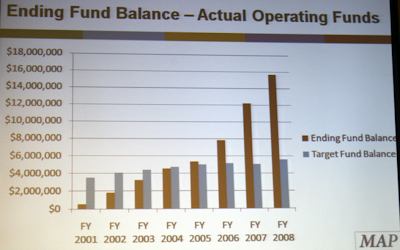 Ally impressed me with the increase in reserves that have been built up since he took office.

But his Tax Cap comment led me to reflect how differently those in government see the Tax Cap from those who are the taxpaying base.

We consider those millions “lost” to government as “savings” for us.

We know that government can spend every dollar it manages to pluck from our pockets (and from our children’s). 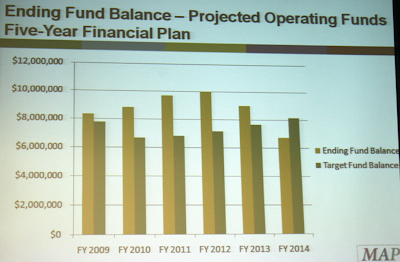 Factoring in the recently signed four-year faculty contract, Ally presented the chart you see above.

Coupled with the “look what just a penny increase in the tax rate will bring in,” it seems to me that the presentation was skewed toward a tax hike before the fund balance target begins to dip under the weight of the new faculty contract.

But the people at the tables didn’t bite.

One table mentioned how surprised they were at how much a penny would raise, but didn’t go so far as to recommend that taxes be raised. I think it was the one pictured above.

Questions were taken from the floor.

Kurt Begalka from the Northwest Herald asked whether increasing expenses would result into dipping into reserves.

“Not yet,” Ally replied.

“Reserves should not be used for ongoing expenses,” he continued. “That’s just not sustainable.”

Ally noted that health insurance costs were growing faster inflation. The college’s attempt to control costs resulted in employees paying 25% of the cost of insurance (50% for dental and visual) “to form a true partnership.”

I asked the total annual cost for an employee and was told that for a family it would be about $5,000. The college is self-insured, which means whatever the college cost of the health care plan the taxpayers foot the bill.

Later Begalka, at whose table I sat, pointed out that employees at many private enterprises pay 100%.

Ally said college enrollment this year is “the perfect storm.