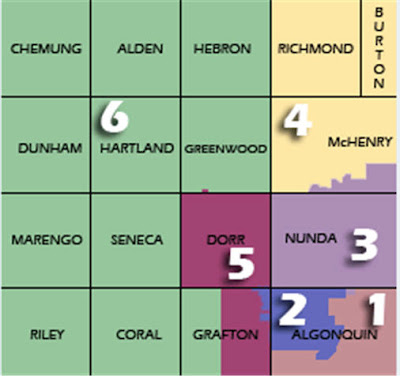 Former McHenry County Board member John Jung is gearing up for another try.

Jung was defeated by Lake in the Hills Village Trustee Paula Yensen last fall. She won by 1,223 in the hard-fought battle.

I have long contended that women running for office in our area have a five percentage point advantage. Five percent of the 38,673 votes cast is 1,933.

That’s not to minimize Yensen’s hard door-to-door campaigning, but her gender certainly was an advantage.

“I worked my head off,” Jung told me after the election.

With the Democratic Party incumbent being a male, Jim Kennedy won’t have the same advantage Yensen had.

But, then again, Kennedy did defeat a man, Perry Moy. Kennedy’s direct mail campaign can only be described as vicious.

If you don’t remember, take a look at the extremely negative campaigning by Democrats in District 5 four years ago. See

In fact, Jung’s running mate, Virginia Peschke, who ran first by 96 votes, did not start campaigning until the end of October. It consisted mainly of yard signs.

Provenzano is also seeking to regain his seat on the McHenry County Board.

= = = = =
The head shot is of Democratic Party McHenry County Board member Jim Kennedy. The photo of John Jung and his wife Josie is from last year’s campaign pamphlet.