The following press release has been received from Algonquin’s Margaret “Maggie” Auger. She seeks the Kane County Board seat held by Republican John Noverini before he successfully ran for circuit judge as a Democrat. The seat is now held by John Mayer, who is a former Dundee Village Trustee, appointed by Republican precinct committeemen to replace Noverini when he stepped down.

ALGONQUIN – Margaret “Maggie” Auger announces her intention to explore an election bid for the Republican nomination for Kane County Board Member for District 23 in the 2010 elections.

Auger expects to complete the exploratory phase of her candidacy and make an official announcement in September. Petition filing for Kane County Board begins on October 26th and runs through November 2nd.

In addition to her service to the village government of Algonquin, Auger’s prior community service and leadership roles include: 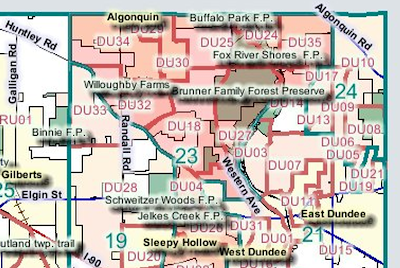 In addition to being dedicated wife and mother and serving her community, Auger brings the credentials of a successful attorney since passing the Bar in 1983. Currently, Auger practices at a Crystal Lake law firm. Auger’s educational credentials include: