Michael Sneed reports that Merchandise Mart honcho Chris Kennedy is “underground” concerning his candidacy for whatever.

He is so underground that he refuses to talk to WBBM-TV political reporter Mike Flannery. Flannery expressed his distaste (or, maybe, it was jealousy) when he appeared on WTTW’s “Week in Review” recently.

Franks floated the notion that he was considering running for governor in the Northwest Herald, but the “great mentioner” hasn’t been mentioning Franks’ name since State Comptroller Dan Hynes made it clear that he would challenge appointed Governor Pat Quinn in the Democratic Party primary election. 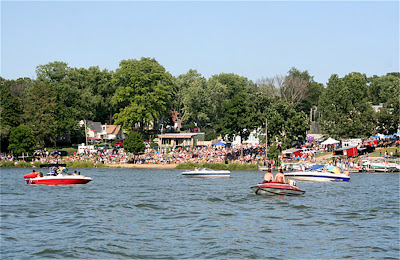 No word from him since he returned from a family fishing trip in northern Ontario.

Except a letter opposing McHenry County’s permitting slot machines. He sent it to McHenry County Board Chairman Ken Koehler, a known gambling proponent.

Such a letter was obviously aimed at the conservative voters in his western and northern McHenry County district.

A sizable number picketed him and State Rep. Mark Beaubien (R-Barrington Hills) about co-sponsoring House Bill 2354 in front of Franks’ office on a blistering March, 2009, Saturday. Both state representatives retreated.

My guess Franks will be unwilling to roll the dice for higher office in what is shaping up to be a Republican election year.

In spite of massive contributions from his family.

All that name identification and no where to go but the ice cream social at the Wonder Lake Water Ski Show.

Oops. That was when he was in Canada, wasn’t it?