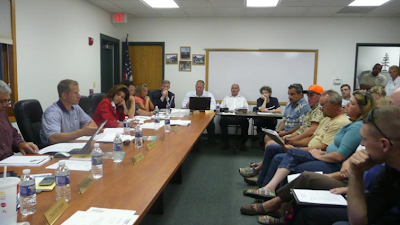 Republicans of all ages, including many members of the McHenry County Young Republicans, hunters, sportsman, and local residents packed the Prairie Grove Village Hall last night.

The Second Amendment advocates were inspired by a Saturday article in the Northwest Herald in which Jeanne Smith, the Village Administrator of Prairie Grove and my 1998 Democratic Party state representative opponent, stated there would be an informal discussion about allowing hunting in the community.

During the standing room only meeting, Brent Smith, Vice-Chairman of the Nunda Township Republican Central Committee, seen standing to the left, said,

“We were not aware the village ever stopped entertaining the idea of hunting within the community.”

Brent Smith’s statement was reinforced at the meeting when the Village President Stan Duda stated,

“It wasn’t intended at the time to prevent hunting.” 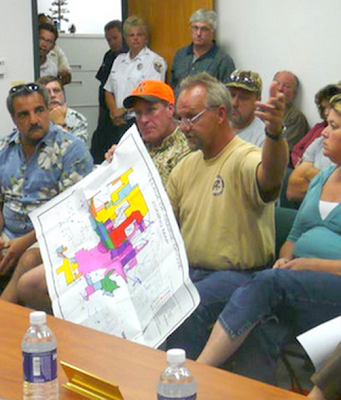 Shortly after the meeting was called to order, the board agreed to change the order of business to accommodate the issue they felt the people in attendance were there to discuss.

At one moment the Village Attorney David McArdle stated that

before 2005 “hunting was legal in the village as long as a firearm was not used to inflict harm to a person or property, used to assault or threaten harm, or used in a reckless manner.

“However, that year the ordinances were typed into a new code book, and the addition of an extra period changed the law, making it illegal to discharge a firearm in Prairie Grove under any circumstances.” 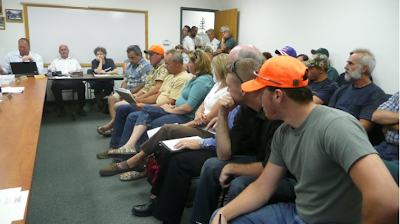 “If the intent was as you claim, to never prevent hunting, then why did Jeanne Smith say this was a meeting to discuss whether the board would entertain the idea of hunting in the community, as if it wasn’t already (allowed).”

Nick Provenzano, McHenry County Board candidate in District 3, stated the deletion of the first sentence of the ordinance would provide adequate protection for the village and not infringe upon hunting.

The board quickly approved a measure to repeal the ordinance and stated that the ordinance would be sent to committee to be re-written.

The attendees applauded the board for there decision.

Many attendees volunteered their time if the committee wanted residents input.

The Ordinance being debated can be found here. It states

“No person shall discharge any firearms in the Village. In addition to those firearms defined by the Illinois Compiled Statutes, for purposes of this section, firearms shall include pump air rifles, potato guns, CO2 pellet guns, paint ball guns and any other device capable of discharging a projectile if used with intent to inflict harm to person or property or to assault or threaten harm to a person or property or when used in a reckless manner.”

The only opponent seemed to be former Lake in the Hills Police Chief and now Director of Police Jim Wales. He expressed concern about people who use and fire guns respecting the residents of the community.
= = = = =