The first was about U.S. Senator and Dr. Tom Coburn’s take on the health care debate. The rest are full of pictures of participants: 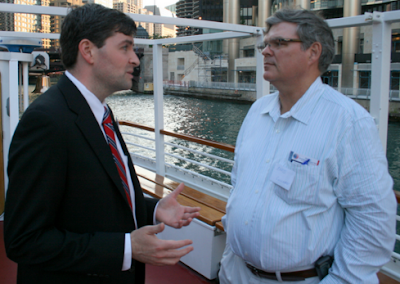 As I continued wondering around the boat, I found Peter Breen and Chris Sullivan near the bow on the upper deck. Sullivan is one of Kathleen Sullivan’s sons. Breen is one aspirant to replace State Rep. Bob Biggins. Breen is Executive Director & Legal Counsel of the Thomas Moore Society, which bills itself as the “Pro-Life Law Center.” He is currently working on the Aurora Planned Parenthood case. Breen has a good button/sticker on his web site, but he wasn’t wearing it. I always preferred to have a really large button announcing to the world that I was a candidate.

The last time I saw my former and now deceased colleague’s twin sons was in San Diego at an ALEC (American Legislative Exchange Council) conference. That was at the Hotel del Coronado beach over ten years ago when my son was mainly interested in looking at the turtles and fish on the first floor of our hotel. My Matthew has grown. I never met former Cook County Board of Review Murphy’s oldest son, but he was on the cruise, too. 29-year old Shaun, on the right, is running for the post his mother held. They were talking to Chris Sullivan.

Maureen almost always made me laugh. I wish I could repeat her interactions with her arch-foe House Speaker Michael Madigan, who lived in Lincoln Towers, where she stayed during legislative sessions. They apparently had similar morning schedules. Some of the conversations, started usually, I gathered by Maureen, were bizarre. If you would like to sample her how she could make little piggies and blueberries hilarious, click here. 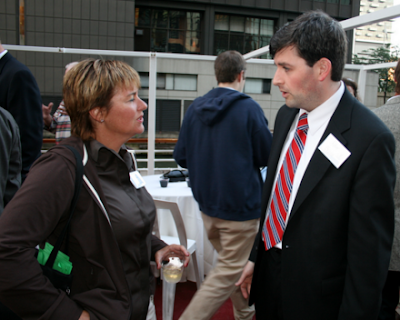 I didn’t get a great shot of Cook County Commissioner Liz Gorman talking to Peter Breen, but I guarantee she would like this one better than the one I took on the lower deck, which included her mother. 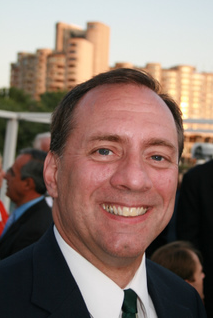 Politicians I have come in contact with almost always want to pose for a picture. I tell them I don’t do posed pictures. David McAloon gave me so much grief about the photo I published of him last year, though, I relented and took this one. Note the corn cob architecture on the Chicago River in the background. It’s pretty obviously designed by the same architect who did Marina Towers. 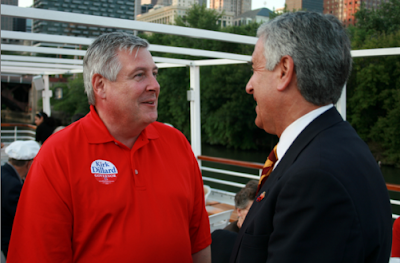 As I was wondering downstairs to get some food, catered by Harry Carey’s, I got this shot of State Senator and gubernatorial candidate Kirk Dillard and State Senator Chris Lauzen.