I went to the Special Ed town hall meeting with school board members July 14th in Huntley District 158. 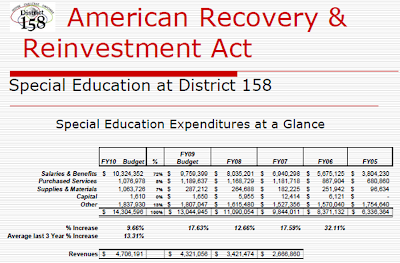 There I received this handout which you can see online or just click to enlarge the image above.

But is this true? Of is just the opposite true?

How much would be spent if all of the special ed kids were regular ed kids?

If you said all of the Special Ed kids were regular ed kids then you can take a percentage of total ed fund expenditures to come up with a dollar amount. This would be a proportionate expense.

In Huntley this number is easy to calculate. The proposed Ed fund budget is slightly over $60 million. The total enrollment figure of 9,032 was handed out on August 20th. From this and about 1,300 students with Individualized Education Plans (IEP’s) you can calculate the $8.64 million.

At first superficial glance $14.3 million is more than the proportionate amount of $8.64 million plus the $4.7 million of extra special ed revenue. By slightly less than a million dollars ($960,000).

Upon this being pointed out by a resident, Controller Mark Altmayer, admitted he “forgot” to include $800,000 in the revenue number.

Altmayer put about 800 grand into the expenditures number for the IDEA ARRA money, but forgot to put the same revenue paying for this into the revenue number.

Altmayer is a Certified Public Accountant. I’m not an accountant, but double entry bookkeeping comes to mind.

Even knowing this mistake, the handout for the next evening wasn’t corrected or footnoted.

After the first Ooopsy, it looks like a wash.

The $8.64 million that would be spent on the 1,300 Special Ed students, plus the $4.7 million in state money for Special Ed comes close to the amount Altmayer says is being spent on Special Ed.

That is until I looked at Huntley’s detailed line item budget.

For the life of me I couldn’t add up to $14.3 million dollars in the budget for Special Ed items.

How can one get that high using only what is spent on real Special Ed expenditures?

The only way you can come up with such a high number is to include large expenditures that are for regular ed students and label all of them “Special Ed. “

What could be those expenditures be? 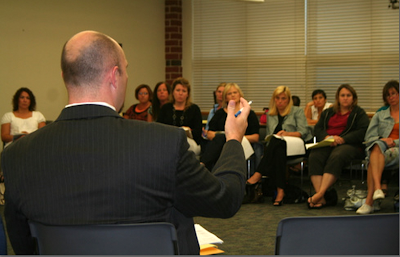 Not all of social worker services and salaries and benefits for example are consumed by special ed students.

Every school administrator knows this.

Is their inclusion one way the Special Ed number got so high?

There has to be upwards of a million dollars of expenditures budgeted in the $14.3 million that isn’t really going to Special Ed students.

I have FOIA’d the line item detail. We will see what I get in the breakdown provided.

When you take out the exaggerated budgeting that isn’t really Special Ed, it looks as if Special Ed students are subsidizing expenditures for regular education students.

That is, when you add the $8.6 million that would be spent on the 1,300 students, if they didn’t have IEP’s, to the $4.7 million that is specifically earmarked for Special Ed, the total being spent on Special Ed seems less than $13.3 million. 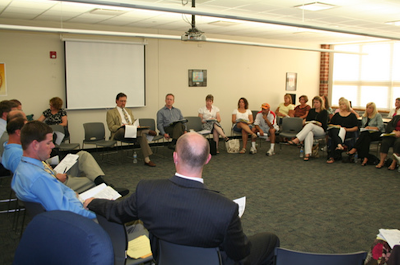 And, if this is the case and if it has been for a number of years, how can the administration and school board argue that half of the Federal stimulus money the district is getting for Special Ed should be diverted to non-Special Ed uses–even if that is legal?

There may be a lot behind why a well-respected Special Ed Director and two Assistant Directors left Huntley all at the same time.

Neither of the two daily newspapers did exit interviews when they jumped ship earlier this year. 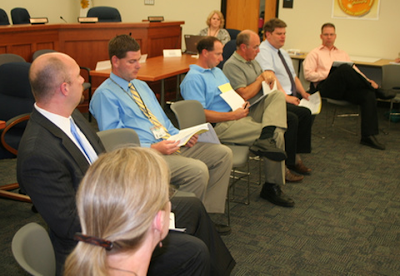 If services weren’t being provided, as mandated by law because other administrators wanted Special Ed to subsidize regular education, that might explain why they left. Maybe they really cared for the Special Ed kids and didn’t want to work in a district where they were being short-changed.

Special Ed expenditures were brought up at the Financial Advisory Committee by Mrs. Lucinda Nelson on August 25th. Nelson is a former school administrator with expertise in Special Ed.

Unfortunately the advisory committee decided not to review the Special Ed budget in any detail this year in spite of the discrepancies and concerns that Mrs. Nelson expressed.

The majority of the committee had no interest in looking at the detail.

A comment was made by one committee member that even if they did ask questions it wouldn’t make a difference.

“Wouldn’t have an impact” is what one committee member said.

Were these members saying the administration and board members wouldn’t listen, so why bother? 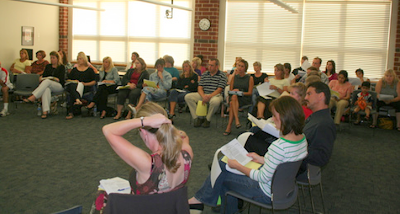 What chance do the Special Ed parents have when a district’s own Financial Advisory Committee complains publicly that “they” (administrators and board members) wouldn’t listen, even if the committee said something?

What if it turns out the $14.3 million Special Ed expenditures number was indeed exaggerated, as it looks like it was.

There is no legal requirement I’m aware for school officials to report such numbers truthfully.

Official oversight provided by having a C.P.A. and two M.B.A.’s on Huntley’s school board of education can’t protect against inaccurate numbers being reported to them.

Data processing folks used to talk about GIGO. Garbage in, garbage out.

When government employees are not fairly dealing with Special Education parents at the local level in person at local meetings what do you think will happen within a vast government-run bureaucracy for health care? How will those less fortunate, but needing more than average cost care be treated by the bureaucracy?

Waiting for the state legislature to levy monetary or criminal penalties for school officials who don’t report numbers accurately is about like expecting there will be no fraud in the Federal health care program now being debated.

= = = = =
The close-up is of Huntley School District 158’s new Comptroller, Mark Altmayer. The second photo shows School Board President Shawn Green addressing the Special Education parents at the first meeting in mid-July. Two others show various parts of the audience. Between are most of the board members and administrators at the July 14, 2008, meeting.