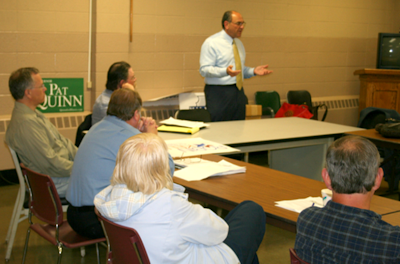 Let me skip to what he said Republicans did and didn’t do.

“Twelve brave souls said they would (vote for the income tax increase.) We only needed five of those brave souls.

Lang said he was told there were two arguments:

“Once is was June 1st, it made it impossible to pass the income tax,” Lang explained, pointing out that passing a bill took an extraordinary majority of 71 votes and the Democrats only have 70 House members.

“There was one woman on the Republican side of the aisle that I sat beside in a meeting in the Governor’s office after the vote,” Lang elaborated. 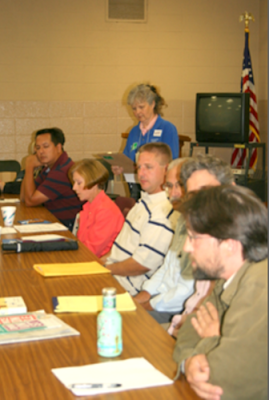 “She’s a person who actually cares about human services.

“She was sitting there crying real tears.

“Do you recall you voted ‘No?'” Lang said he asked.

“This is the kind of hypocrisy that go4s on in Springfield on a daily basis,” he added.

“So, the reason we did not pass the income tax was the Republican Party.”

In the question and answer question, McHenry County Board member Paula Yensen asked Lang to comment on what a not-for-profit lobbyist had told her:

“The reason Republicans wouldn’t cross over was because they wanted a greater say in reapportionment and wanted $2-3 billion more cut.”

“Cross was most interested in getting to June 1st (when an extraordinary majority higher than the number of Democrats in the Illinois House took effect),” Lang said.

“The idea that the Republican Party was protecting the taxpayer is a bunch of bull.

Other articles in the series: