In he opening remarks McHenry County Democratic Central Committee Chair Kathy Bergan Schmidt stressed the importance of the 2010 election year by pointing out that it would determine who would reapportion the General Assembly. Of course, congressional districts would also be up for grabs.

At one point he said,

Lake in the Hills McHenry County Board member Jim Kennedy asked about county board reapportionment.

“That’s going to affect me because they’re (the Republican county board members are) going to be redrawing the district.” 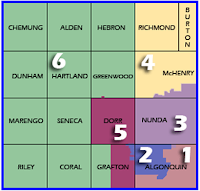 “The Republicans control the county board,” Lang agreed, suggesting,

“Even the most Neanderthal will recognize that the two-party system is important.”

Democrats now have two seats in county board District 5 and one in District 3.

= = = = =
State Rep. Lou Lang (D-Skokie) is the man in the photograph. The map of McHenry County shows the six county board districts.