This is the final and probably most important part of Methodist Pastor Steve Bullmer’s July sermon on marriage and divorce.

It contains an interpretation of the woman at the well story in the Book of John which was a revelation to me.

To review, the first installment explained the difference between the two different words translated “divorce” in our Bibles. The second article explains the minister’s advice to those who have never been married. The third is to those in “good” marriages. Yesterday’s was aimed at those whose spouses have left them.

Here’s today’s–on after you get divorced: 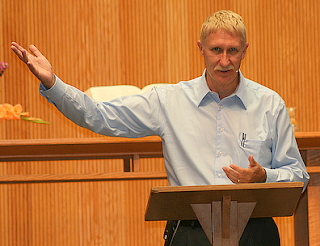 One final sermon. There is a story in Scripture where Jesus ministers to a divorced person; the fourth chapter of John. He sends his disciples into town to prepare a meal.

Jesus is waiting for someone; and then she shows up.

They talk for awhile, and then Jesus offers her living water. She says,

“I would love some of that water.”

“Great, go back into town and get your husband.”

“I know that. You’ve been married and divorced five times, and the guy you’re presently living with is not your husband.”

What do you think Jesus is going to say to her next?

“I can’t believe you!

“Is there something psychologically wrong with you?

“Do you not understand what I said in the Sermon on the Mount that if you do this you’re a bad person?

“Don’t you know that God hates divorce? Get out of my sight!”

Do you think that’s what he says?

Maybe you do, because people who claim to be representing Jesus and speaking for God have said those things to you.

He says none of that.

He reveals to her that he’s the Messiah. 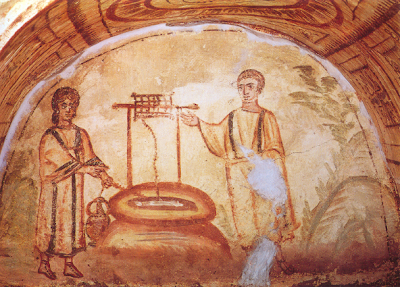 And he demonstrates his love to her.

And when she comes to believe in him he makes her the first woman preacher in the Bible and sends her back to town where she tells as many people as will listen that she has met the Savior.

And the Bible says,

“And many came to believe because of her testimony.”

That’s the power of Jesus’ love to divorced people.

I put this story next to Jesus’ teaching on divorce, and you know what I see?

Grace. Grace for all. Help for life’s struggles.

All right, here’s the word, because I don’t want you to miss it:

The painting of Jesus with the woman at the well was found in Rome’s Catacombs. I found it here.