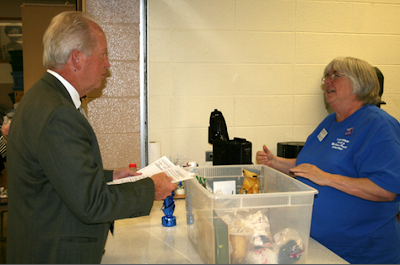 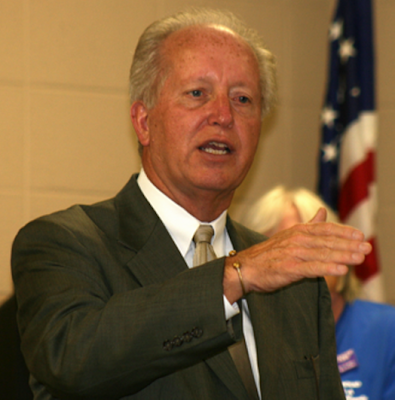 Before the above photo, there was a slight bow as Link went up to where Schmidt was putting out goodies for the assembled committeemen and guests. It would have been a classic.

During the meeting Schmidt explained how Link had been helpful to McHenry County Democrats back to when John Bartman chaired the central committeeman.

“I’d like to welcome Cal Skinner.  I never thought I’d live long enough to do that,” he said before saying,

“I can actually go back to John McClatchy.”

Link explained that he had been Lake County’s Democratic Central Committee Chairman for eighteen years.

“We took a very bright red county and made it light blue.  It took a lot of work.  I could not have done it by myself.” 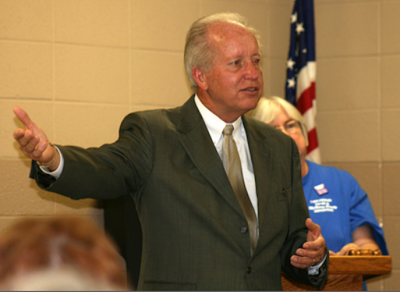 Referring to his candidacy for the Democratic Party nomination for lieutenant governor, he said,

He said he would use the position to advance issues across the state the way he had passed the Smoke Free Illinois bill.  He wants the office to advance economic as it does in Indiana.

Link said his re-write of the Workers Compensation law–the first time in 30 years–had pleased both labor and industry so much that both gave him awards for his role of facilitator.

He was extremely proud of getting the Early Voting law passed.  He pointed out that he “carried all election law” bills and had faced House Speaker Mike Madigan down over Early Voting.

“I stood heel to heel with (Madigan).  I told him I wouldn’t sign off on (his bills if he wouldn’t pass Early Voting).” 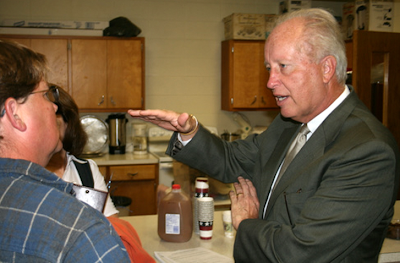 Making his pitch to his fellow suburban residents, Link observed,

“We have nobody on this ticket who had announced–and I’m saying ‘announced’–who lives outside of Cook County, except me.”

Guess Link was referring to the possibility of McHenry County’s State Rep. Jack Franks running for governor or some other statewide office.

“I have the experience.  I come from business.  I know what it’s like to run a business.”

He also pointed out he knew what it was like to live in a rapidly growing county.

“I was born and raised in Lake County.  We have our problems.  We need to have that perspective (at the table).

“I’m asking for your support.”

= = = = =
The photos are of State Senator Terry Link.  In the top photo he is talking to McHenry County Democratic Party Chair Kathy Bergan Schmidt. In the bottom picture, he is talking to Spring Grove’s Jeff Thirtyacre.