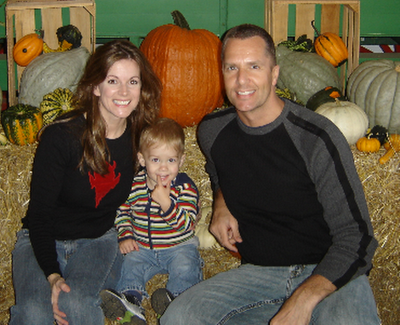 Lakemoor’s Diana Hartmann is thinking about running for the Republican nomination for McHenry County Regional Superintendent of Schools.  You see her with her now-two year old son and husband Michael in this photo from last fall at Stades Farm.

With Gene Goeglein retiring, there is an obvious political opening.

When I saw her name and email address in the McHenry County Clerk’s office on the list of people who have taken out petitions, I shot off a message asking for details.

“I was sitting on the fence about jumping in the political scene. I thought it may be a little late.

“However, I was interested in Regional Office Superintendent, Republican, and I live in Lakemoor.

“I hold a superintendent license and have been an educator for the several years.

“I’ve lived in McHenry County for about 4 years and prior to that Rockford, IL for about 10.

“Therefore I decided to look at this the next time around. Since I need 560 signatures and almost nobody knows me, I thought I better build this up more.

“Unless I hear people would like me to run, I will wait and build my platform.”

Hartmann’s email is dbrierton@comcast.net.  She asks those who would be interested in helping pass petitions email her.