As I pointed out in an article Saturday, the Chicago Tribune came six days late to the ACORN prostitute-pimp sting story that Fox News broke on Friday, September 11th.

And, even Friday, the accompanying editorial cartoon could have been interpreted to have racial overtones.

But McHenry County Blog came to the rescue. 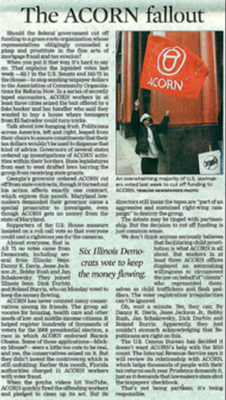 Sunday, the Tribune’s editorial page offered a second editorial on the subject–complete with eye-catching red ACORN banner.  It highlighted the six Illinois Democrats who voted to keep the Federal spicot turned on.  They are our two U.S. Senators, plus Congress members

There used to be a “Chicago Journalism Review,” to which I subscribed. I remember its coming from Niles or Skokie, but as I searched for in online and found a 1969 story in Time Magazine, it seems to have been more professional than the mimeographed version I recall. Time says that it was written by reporters disappointed in editorial direction. Maybe I am remembering a later version. As I write articles like this, I think of what a field day the authors would have with today’s technology.

Jim Bowman’s “Blithe Spirit, the Blog” carries on this tradition.