The blog has taken off. As I write this article, 1,623 folks have taken a look, according to what is apparently the first counter installed. 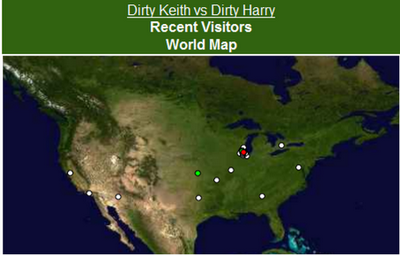 A second counter popped up yesterday. It has a map feature which shows where readers are located.  You see the nationwide distribution of the last 100 hits above.  I copied it yesterday afternoon.  The concentration of hits is in our area, as you can see below. 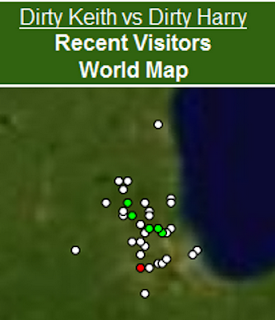 Here’s what a close-up of readers in the Chicago area looked like yesterday.  The one up top is Milwaukee.  The background is not too sharp, but you can make out Lake Michigan.  The two dots above what looks like a “Hidden Mickey” are in Walworth County.  One guy was on the blog for over two hours, the counting mechanism indicates.

The blog is not laid out like McHenry County Blog.  The latest entries are not on top.  They may be in the middle or at the bottom.  To find what is new, one has to go searching.

How would one characterize Bachmann’s effort?

It’s satire.  No doubt about that.

Bachmann is using it to even scores.   Bachmann was none too pleased at Nygren’s comments to the Northwest Herald about Bachmann’s lack of investigative abilities.

The blog’s first substantive post had a photo of what readers were led to believe were items related to some arson crime on a rainy night. One that had not been solved, it seemed.  It was beyond me, but insiders might get more from it.

There are a lot of implications in the blog, but readers have to pretty much draw the inferences.  They are usually not stated directly.

To be sure, the content is over the top on any number of topics.  It even contains some “eye candy.”

It reminds me of the whispering campaigns that occur in virtually every campaign of any significance.

One side tries to get undecided voters to oppose the opponent because of something they dare not put in writing because of the backlash it might occur among those who think the whisperers are just taking part in dirty politics.

But, assuming the charges are amusing, if you aren’t the target of the satire, a number of people might be interested in the blog.

Indeed, what I found above shows a number are.

How often does a sheriff get taken on by a citizen?

Maybe that’s part of the draw.

As I have stated before, ridicule is the one type of criticism that politicians can’t stand.

As I think about what Bachmann has created, it reminds me most of what Saturday Night Live did to Rod Blagojevich and Roland Burris.

Definitely over the top, but funny.

With Bachmann’s blog out there, neither of Nygren’s opponents has to play the bad guy.

on which he asks readers to send him information at this email address:

Somehow I don’t think Bachmann has enough material to keep this going through the November general election in 2010, but it’s going strong now.