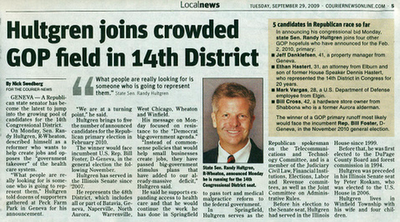 Like sharks smelling blood in the water, candidates are surfacing hoping to kill re-election chances of Blue Dog Democrats.

The thought first came to me when 8th congressional district Barrington native Joe Walsh announced he would seek the GOP nomination against Melissa Bean.

Now State Senator Randy Hultgren is running for Congress in the 14th district south of the Kane County line against Democrat Bill Foster.

What both candidates have in common is that they have run campaigns before. Hultgren for DuPage County Board, state representative and state senator; Walsh for Congress against Sid Yates and for state rep. Hultgren won, Walsh didn’t, but it gave them both experience in the type of race that someone who wants to be a congressman would find helpful.

I don’t see lots of money that Hultgren has raised, but his campaigning skills are honed.

Walsh obviously did not defeat the long-term Chicago Democrat in the 1996, but that race and one for state rep. would have developed campaign skills. He probably accurately reports that his fund raising skills will be quite helpful in what will probably develop into a multi-million campaign (at least on Bean’s part and necessary on Walsh’s part, if he is to win.)

Others seeking the 14th District nomination are Jeff Danklefsen of Geneva, Elburn’s Ethan Hastert, Mark Vargas of St. Charles and Bill Cross, from Shabbona. It should be noted that Hultgren is from the eastern edge of the district, which may not be an advantage.

Those announced in the 8th District are Maria Rodriguez the Long Grove village president, John Dawson of Barrington and Greg Jacobs of Mundelein