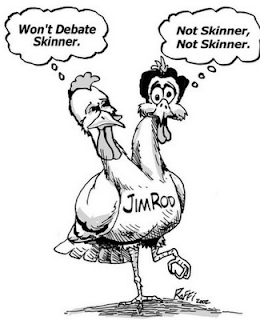 One of the men I ran against in the 2002 Libertarian Party candidate for governor has been indicted.

The laughing stock of Illinois, if not yet convicted felon, Rod Blagojevich.

The other one was Republican Jim Ryan.

They both had a lot in common.

I called them “JimRod, the Two-Headed Chicken.”

The cartoon you see above by Alex Raffi was commissioned by the campaign.

We also had various people—some of whom still probably wish to remain anonymous—wearing a two-headed chicken suit. The second head was floppy and I never did decide which head represented which candidate.

Ryan and Blagojevich not only refused to debate me, deliberately deciding not to participate in the Illinois League of Women Voters after I met the League’s qualification of having polled higher than 5% in a third party poll (the 1,000 person Daily Southtown newspaper poll), but they were not even brave enough to walk past me on the way to one of their “power party” only debates.

I remember the WGN-TV one vividly.

Upon learning that I was standing at the front entrance of the studio (JimRod and picket sign wielding supporters having been banished to the street entrance), both candidats’ vans drove all the way around the parking lot—they wouldn’t even drive past the entrance—to a side studio door to enter the building.

When the gathered non-WGN camera folks figured out what was happening, there was a rush to the eastern edge of the building to get their shots.

I wonder if Ryan will deign to debate others who file for the GOP nomination for governor.