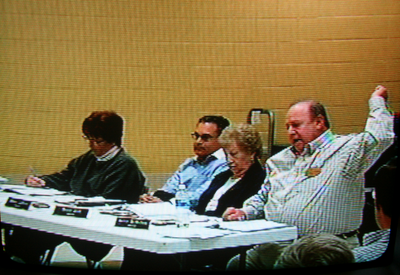 He writes of how the board, by a 3-2 vote censured newly-elected Township Trustee Gerry McMahon.  McMahon and Betty Zirk voted against the motion.  Township Supervisor Linda Moore and Township Tru

McMahon is the one who consistently interrupted his running mate, newly-elected Township Supervisor Moore.

The only other local public officials to have been censured are McHenry County Board members Donna Kurtz and Scott Summers.  They were not censured because of constant interruption of MCC board meetings.  They were censured for changing their minds on the advisability of putting their taxpayers in debt to pay for a minor league baseball team and announcing the change at a Crystal Lake City Council meeting considering the necessary re-zoning.

The photo you see above was taken from the video recording of the prior meeting.  From left to right you see the four Grafton Township Trustees, Barbara Murphy, Rob LaPorta, Betty Zirk and Gerry McMahon.