We are apparently back to the days when word of mouth was the way you figured out that something interesting might be going on at a city council meeting in Crystal Lake.

I went to the Crystal Lake city web site this morning to see what was on the agenda Tuesday night.

As you can see below, the agenda was unavailable.

This is so, so like McHenry County College in times past.

Wait until the last minute to put up the agenda.

But, it is really worse, because MCC posts not only the agenda, but the board packet. That way people can take a look and see if there is anything interesting.

Crystal Lake has a newly-designed web site about which the council members waxed enthusiastically.

Perhaps because they get a hard copy of the council packet, none of the council folks seem to have noticed that the public could be better served by the new web site.  The board packet could be posted, as not only MCC has proven, but so have School District 158 and 300.

In any event, after Crystal Lake Kiwanis last Wednesday noon at Colonial Cafe, I ran into Mary Ann and Jack Schaffer. Mary Ann had to go, but Jack had time to talk. 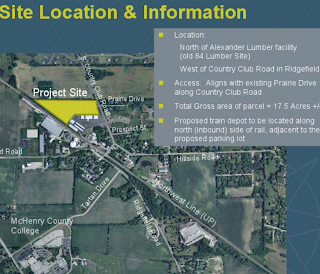 He didn’t give me the early “party line” that the station had to be on the east side of the tracks so morning commuters wouldn’t get killed so that’s why the property half-owned by McHenry County Board Chairman Ken Koehler had to be selected.  (Schaffer was appointed to the Metra Board by Koehler.  He did not vote to purchase the land.)

He told me that a map with dots of current commuters addresses in the area had been shown at Metra’s presentation to the Crystal Lake Planning and Zoning Commission. He said the same presentation would be made to the city council on Tuesday.

The map was so interesting I filed a Freedom of Information request after I got home for the slides.

Thursday morning I got a reply to my request saying they needed to take another two weeks to send the data because ot the undue burden of the request.

I rolled my eyes when I read that and called Jack. He got the slides to me the next day…except for the map showing where current Metra commuters live in Bull Valley and north of Hillside Road.

The statistics below were included, but they consisted only of percentages. No numbers. 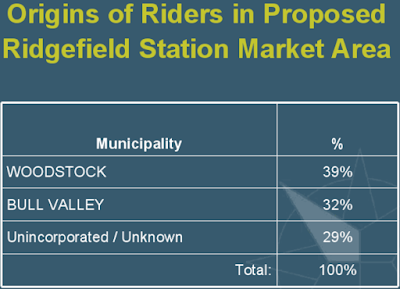 So, I’ll be off to city council to see if the map I think might be relevant to the decision shows up there.

I just checked back on the Crystal Lake city web site. The agenda for the November 3rd city council meeting is still not posted as I post this article.

But the agenda for the November 4th Planning and Zoning Commission is available for the public to view.

Maybe the city council agenda is posted on the front door of city hall the way it used to be when the station was on Main Street and the councilin second floor chambers.