Yesterday, McHenry County Blog published a little of the unfocused situation surrounding the county board’s debate on gambling, as well as the roll call showing who was up for election this time around.

Today, I’m going to tell you what I saw from a civics classroom point of view.

From the beginning District 3 county board member Barb Wheeler has been ready to vote to ban video gambling in the unincorporated part of McHenry County.

She made that very clear in the License and Liquor Committee.

British Member of Parliament Edmund Burke took a position similar to Wheeler’s and several of her colleagues. He epitomizes the “trustee model” of representation. Some might refer to the role as a “statesman.”

Burke’s most famous quote of justification was to the electors of Bristol in 1774:

“Your representative owes you, not his industry only, but his judgment; and he betrays, instead of serving you, if he sacrifices it to your opinion.”

Here’s how Wikipedia explains the different concepts of representation:

“The trustee model of representation is a model of a representative democracy. Constituents elect their representatives as ‘trustees’ (or ‘entrust’ them) for their constituency. These ‘trustees’ have sufficient autonomy to deliberate and act in favor of the greater common good and national interest, even if it means going against the short-term interests of their own constituencies. The model provides a solution to the problem uninformed constituents who lack the necessary knowledge on issues to take an educated position.“This model parallels the delegate model of representation, which is a model in which the representative is a tribune of the people.”

I have to admit on issues that I did not campaign on I tended toward the delegate model in my representation in the Illinois House of Representatives.

If the people of McHenry County wanted something, I would more likely than not be presenting that viewpoint in the General Assembly during my sixteen years there. I conducted mailed polls to gain a sense of the electorate in addition to putting out my listening post in public places. 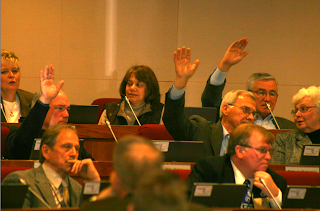 On financial issues, I tended toward the trustee model, especially for those from the educational community hell bent on having me vote for a high income tax, most of the proceeds of which would end up in Chicago and Downstate. I cut my teeth doing cost-benefit analysis at the United States Budget Bureau right after grad school in public administration (probably called “policy analysis” now).

The debate on whether there should be an advisory referendum on gambling brought the various concepts of representation into focus like I have not seen them previously on the county board.