This is the fourth article on Tuesday’s gambling debate at the McHenry County Board. Click to find who voted how and for Part 1 and Part 2.

Having failed to alter the agenda to allow a Tuesday up or down county board vote on video gambling, Nunda Township’s gambling opponent Barb Wheeler next sought to table the referendum resolution.

This motion was seconded by Ersel Schuster.

As it sat on the agenda, the outright ban was to be considered for 30 days and voted upon the first Tuesday in December.

But that rule can be waived.

Tina Hill asked if the committee was “going to ask to waive the 30-day review (for the gambling ban resolution).”

License and Liquor Committee Chairman John Hammerand related the history of the committee discussion. It started with talk of a ban, then “we decided it would be nice to have the people involved in the decision.” 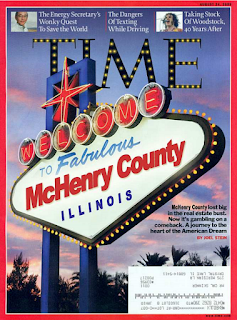 He said he wanted the county board to have the opportunity to be a leader in the communities, so that municipalities could put similar referendums on the ballot on Feb. 2nd.

“I certainly support the referendum,” he said.

“It’s not my goal to waive the rules,” Hammerand continued.

“I would like to move forward to allowing people with the county weigh in.”

Woodstock’s Hill wondered why there was all the fuss. She listed the number of people in each county board district who would be eligible to vote, 47,923 in all, while there are 200,228 registered voters in McHenry County. That’s not quite 25% of the total living outside of municipalities.

Huntley’s Dan Ryan pointed toward the moral aspect of the issue. He said there was no question from the fiscal point of view:

Ryan voted for a referendum, assuming I would guess that people know what their moral stand on the issue is.

Yvonne Barnes of Cary came down on the trustee side of representation:

“I’m opposed to postponing the vote (on the gambling ban).” 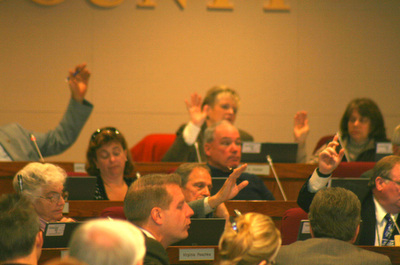 “All I’m asking is to have status quo until we have a referendum and let them speak.”

Hill attempted to clarify what would be voted upon. Hammerand seemed to say that a vote on both Tuesday would be acceptable.

Pete Merkel, up for re-election in an unopposed McHenry-Richmond-Burton Township primary, took the trustee approach. He told of two advisory referendums on hot issues which a park board and city council decided to put on the ballot in an attempt to reach consensus.

No consensus resulted, he noted, supporting the “no advisory referendum” side of the issue.

“That’s why we get paid to make the tough decisions,” Merkel added.

“I’ll bet we’re going to be back here at the end of February with a whole roomful again and we’ll be having the same discussion.

“Do we want to do that (have a referendum) with the 2030 Plan, with the public safety building?”

Merkel then pointed out that it was a social issue and questioned whether a “low turnout” primary election would yield a valid reading of public opinion.

His vote, nevertheless, was against holding the advisory referendum.

She remembered an advisory referendum that received 80% approval, but was ignored. The subject was whether the county board should require a three-quarters vote to approve conditional use permits.

“I think the referendums should be reserved for asking people if (they want higher taxes).

“This is just government cowardice.”

Sandra Salgado, who like Merkel has not primary opponent, also took the “we can make the decision without voter input.”

“I can’t tell you how aggravated I was when legislators stood up here and said, ‘(You’re) going to make the hard decision.’”

“You don’t want the people to say you don’t want to hear them. (Let’s) not put the burden on our voters. We are elected to make these tough decisions.”

Also speaking in opposition to a referendum was Yvonne Barnes of Cary.

“I believe as elected officials it is our responsibility to make these decisions.

“This issue affects people throughout the area (county). An advisory referendum does not include (those in incorporated areas) in making the decision.”

Merkel then referred to the provision in the legislation that allows 25% of the voters to petition for a binding referendum.

Hammerand pointed out how extraordinary high that 25% signature requirement is.

“If it is (for) the board to wash out this referendum, I have no objection.”

He then attempted to amend the resolution motion to require a county board vote after the February 2nd primary election.

Tina Hill seconded the motion, “even though we’re probably on different sides of the issue.”

The attempt failed on a voice vote.