Below is Congressman Don Manzullo’s statement:

“I’ve always supported opening the Thomson Correctional Center as a full-fledged state or federal prison because it would provide needed jobs for residents of the region; however, I continue to have serious reservations about moving Guantanamo Bay terrorists to Thomson. 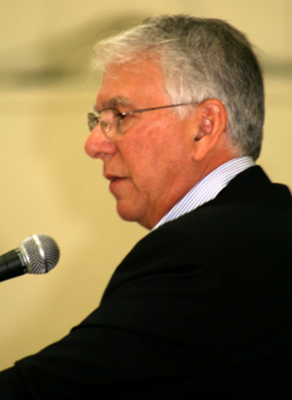 “When I first learned of the proposed transfer of the terrorists, I set out to discover the security impact of moving Guantanamo Bay to the United States – not closing its operations, but moving it to a new location.

“My primary objective has always been to protect the people I represent. I never believed these terrorists could escape from Thomson, but my concern – shared by Democratic Senator Jim Webb of Virginia., Independent Senator Joe Lieberman of Connecticut, and former Democratic Governor Kathleen Sebelius of Kansas, who fought President Obama and succeeded in keeping Guantanamo from moving to Fort Leavenworth – is that the hatred the terrorists have toward Guantanamo would transfer to Thomson, Illinois, thus creating a magnet for terrorist activity.

“I received an in-depth briefing from the top architect of the plan – Phillip Carter from the Department of Defense (DoD) – who confirmed Thomson would become the largest concentration of incarcerated terrorists in the United States. Mr. Carter agreed with me there would be an increased security risk to northwest Illinois, but he had no way of estimating the extent of this threat. He said, however, he was confident that federal and local law enforcement officials could ‘manage the risk.’

“I was shocked, because if there was no way to measure the threat, then how could it be ‘managed.’  He advised he would make available others at DoD for further briefings. I sought more information from DoD, only to discover that Mr. Carter had immediately resigned a few days after he briefed me.  DoD refused further briefings for 11 days, and I learned little new at a second briefing.

“The White House said in a statement today:

‘Closing the detention center at Guantanamo is essential to protecting our national security and helping our troops by removing a deadly recruiting tool from the hands of al Qaeda.’

“It’s that hatred I’m concerned will transfer to Thomson. The American people have a right to know the impact of moving Guantanamo’s operations to U.S. soil.

“Unfortunately, that information will never be known because on Thursday, December 11, language was inserted into the ‘omnibus’ spending bill to keep any information on the issue ‘classified,’ available only to Members of Congress, who cannot share its contents.

“There is enough unclassified information to release to the public without compromising sources or security, such as the stunning article that appeared in the Washington Post on November 29th which investigated the story of Yemeni Arif Rahim, whose brother, Uthman, has been detained at Guantanamo Bay for 8 years for attacking the USS Cole. Consider this passage in the story:

“Arif said he was confident that Obama would close Guantanamo next year. If he doesn’t, or if Utham and other detainees are sent to a prison in the US, many families would consider it an ever greater betrayal. ‘The families, their friends, their tribesmen will have more hatred for the United States,’ Arif said. ‘And perhaps they will consider taking the same path as the extremists.’

“I also inquired of several other agencies, trying to asses the impact these terrorists would have on American courts, but I had to turn to other sources.

“I discovered, not surprisingly, that the detainees will obtain new constitutional rights once they set foot on American soil, especially the ones to be housed at Thomson because they would be incarcerated permanently with no trial at all.

“In fact, the terrorists were originally sent to Guantanamo because the US needed not only a secure an impenetrable facility, but one off shore that limited constitutional rights because of dealing with the ‘military combatants.’  One only needs to consider the trial about to take place in federal court in New York City of Khalid Sheik Mohamamed to observe he is receiving more rights than a military tribunal in Guantanamo.

“I believe the people I represent need to know the impact on the federal courthouse in Rockford, whether trials would be held there as lawyers work to assure them they are entitled to a trial.  Even the Obama Administration says holding these terrorists without trial ‘is a gray area.’

“Because the decision to move Gitmo to Thomson has already been made, I’ll press every level of the federal government to enhance the security of the people of this area in order to protect their families, critical workplaces, infrastructure, and schools.

“And, in addition to continuing to work with Senator Durbin, I’ll bring to the attention of the President, the Governor, and Senator Burris the fact that northwest Illinois needs continued help on economic development, such as prioritizing the widening of U.S. Route 30 in Whiteside County and the last link of our interstate highway system, U.S. Route 20 from Freeport to Galena.”

= = = = =
The Chicago Tribune reports that the trials will be held at the prison, not at the Rockford Courthouse.