The pre-Crystal Lake posts of my father’s biography can be found by looking down on McHenry County Blog. 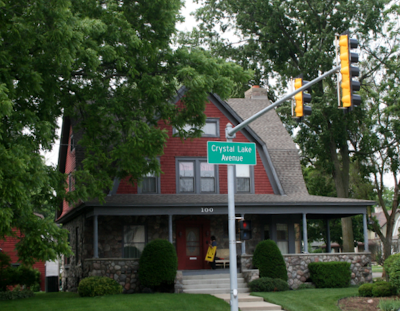 100 W. Crystal Lake Avenue today. The house is the same, but the intersection is much more functional.

Dad rented a home at 100 W. Crystal Lake Avenue. We started school there (the junior class built its Homecoming float there) as Mother and Dad looked for something that would allow more access to the lake for the 50-horsepower Wolverine outboard boat we bought that summer. The boys of the previous tenants had used the attic as a BB gallery. The BB’s were everywhere. 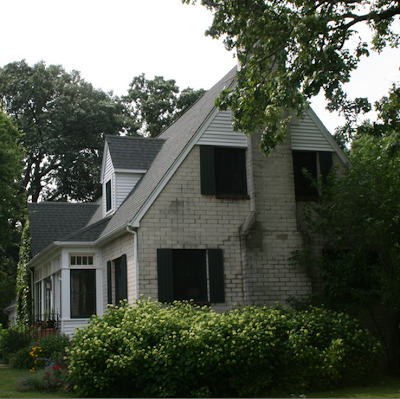 Soon my parents found a home to rent at 800 West Broadway in Lakewood, but, more importantly in the Country Club Addition Property Owners Association. That gave us the right to keep our boat in the lake.

Since there was no Rotary Club in town, Dad joined the Crystal Lake Kiwanis, where he became the long-time secretary, doing the tedious record-keeping job of the first service club in Crystal Lake.

After the November election, Dad received a “thank you” letter from the ward committeeman in Chicago where he lived.

My father, a ghost voter in 1958. Who would have believed it?

Having been active in politics in Easton, Maryland, Dad was determined not to become so in Crystal Lake. 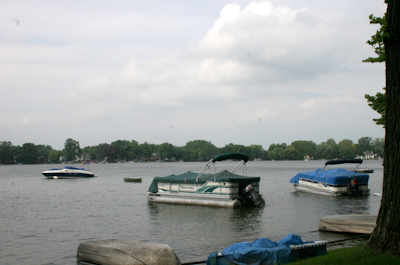 Crystal Lake, the reason the Skinners moved to town. In the center, where you see the pontoon boat, Mr. Litzenburger anchored his splendid Chris Craft board.

It took two years for him to break his pledge.

The Crystal Lake High School District was holding a bond referendum during the spring of my senior year. He started writing letters to the weekly Crystal Lake Herald. The next week the school board’s president would reply. My father would offer a rebuttal the next week. (None of the current Northwest Herald nonsense of only allowing one letter a month.) This went on until I knew the teachers were looking at me and pointing out I was the son of the guy trying to defeat the bond issue.

The bond referendum lost. Since it was my last semester and Oberlin College had already accepted me, my grades didn’t matter as much, but I don’t think any of the teachers retaliated. I still remember standing in the study hall while a couple of teachers looked my way from the westerly hall near Ken Tarpley’s speech class room. I wondered if they were saying, “There’s his son.” 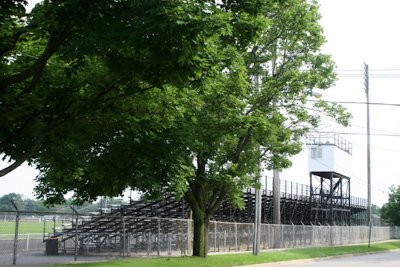 Later Dad ended up on some committee to solve whatever space problem was perceived and, when he discovered that the football field had to be moved, he asked if a sidewalk could be built. I suspect that was his major victory on the committee.

Now, too often, I tell my son as we drive on Wallace, “That’s my Dad’s sidewalk.”

my son replies, sometimes in an irritated tone of voice.

When Richard Nixon ran for office in 1960, Dad became head of his local citizens committee. That put him in touch with the Republican precinct committeemen.

At some point in the 1960’s, Dad took over the publication of the Government Improvement League Newsletter, GIL Newsletter, for short. He wrote about assessments and taxes.

Dad’s office at the Barley and Malt Institute was in the Builder’s Building on Wacker Drive when he started work.

After the lease ran out, he convinced his board to move the office to Des Plaines. (“If we ever meet in Chicago, it will be near O’Hare, not Downtown Chicago.” They agreed. It was on the corner of Route 14 near the train station across from the movie theater in an old Masonic Hall.) 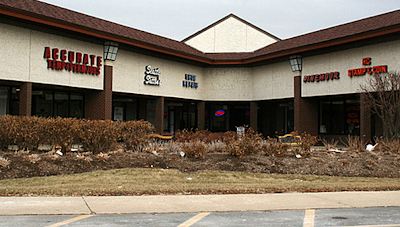 When that lease came up, he asked if he could move the office to Crystal Lake, arguing that if the board ever met in Chicago, it would be at a hotel near the airport, not in the Des Plaines office.

He ended up on Brink Street, later on the second floor on the west side of Williams Street, then the tip of “V” in the Crystal Lake Plaza and, finally, at Mike Janek’s old auto dealership on the corner of Woodstock and Brink.