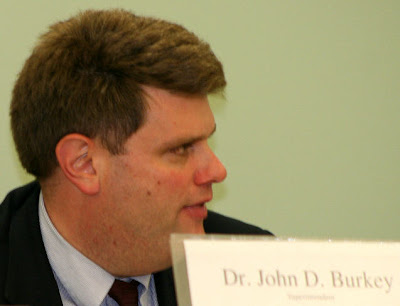 Huntley School Board is scheduled to consider a resolution tonight which is intended to cure a problem for School Superintendent John Burkey.

His protective school board majority, led by Tony Quagliano in this instance, has proposed a resolution that says,

It’s OK that you didn’t do what we said.

Well, those aren’t the exact words. Here they are:

”The Board of Education of Community Consolidated School District Number 158 resolves that the actions and decisions made by the current and past administrators on matters concerning Policy 7:30 (Student Assignment and Intra-District Transfer) are approved and ratified by the Board of Education, and that no action previously taken by these administrations under said policy was a violation of said policy as previously existed prior to amendment December 20, 2007.”

So, what’s this all about?

Burkey and previous administrators have apparently deciding on their own when an exception shall be made to allow a student to go to a school other than the one where he or she lives.

It appears Burkey has been called on the carpet for this practice.

The explanation under the short resolution points the finger, not by name, but probably at board member Larry Snow.

”Recently the board became aware that an individual, who is believed to be a current board member, had filed a complaint with the McHenry County State’s Attorney’s Office claiming the Superintendent had committed an act of misconduct by not complying with this written policy. The board was not made aware by this individual that this specific complaint existed, nor was the Board made aware by this individual that such action was contemplated.”

“That’s false,” Snow told me. “The board was made fully aware of the policy violation at a November meeting at which Quagliano was a no-show.”

This reminds me so much of what Cook County does every year in the General Assembly.

They propose and usually pass a bill that says, “Just in case we screwed up the tax levy, this bill will make it impossible for us to lose any property tax dollars. Please vote, ‘Yes.’”