Yesterday’s explaination of the free luncheon held after (and even during) the judicial swearing in ceremonies ended with the teaser that today’s article would talk about how it was financed.

That was also the day that the judges, lawyers and others celebrated State Rep. Jack Franks’ successful separation of McHenry County from the domination of Lake County in the 19th Judicial Circuit.

It was the inauguration of the 22nd Judicial Circuit or “Double Deuce” Circuit, as McHenry County Circuit Clerk Bill Kays explained, complete with suggested seal.

But, back to the question of how the reception was financed.

First, remember, I would not even been interested in this topic if McHenry County Republican Party Chairman Bill LeFew had not made such a big deal about it by sending Amy Mack’s anonymous hit piece against McHenry County State’s Attorney Lou Bianchi and, then, fessing up to it.

Where did the money come from to pay for the reception after the judges were sworn in during the first week of December, 2006?

$500 came from the McHenry County Bar Association. It went into the “Court Automation” fund.

Ralph’s Rentals was paid its $888.81 out of “General Operations – Non Departmental.”

The flowers and food were paid from a “Court Automation” account in the Circuit Clerk’s office.

When I talked to Palmer, I asked about the bills, which she had not personally reviewed prior to my Freedom of Information request. 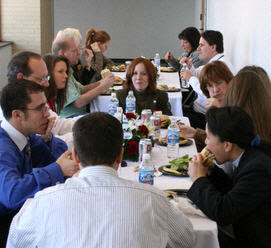 When I brought up the sales tax the county had paid, she said,

When I asked about paying for the $2,718.65 for the flowers and the food from the Court Automation account, Palmer told me,

”The decision was made from the level of the group that was assembled to put on the 22nd Judicial Circuit event that occurred.”

Palmer explained how things had changed in the last two months:

”We’ve started to review every bill.

I asked if she could fax me the standard operating procedures.

“We’re working on getting together our financial accounting manual,” she said.

“We’re trying to get all of our policies and procedures together in that manual. I’m making it a top priority.

“We have 38,000 invoices a year that come though this office. We would look at the large bills–probably over $100,000. There would probably be some under $100,000, construction bills that (former County Auditor) Ruth (Rooney) and I would personally review, as they were construction payouts.

“Then our staff would be looking at the other bills and they would come to us if they had problems or questions about it.”

I’ll attest that the food was good.

I took a tuna fish sandwich and a can of pop with me as I left to write my stories.