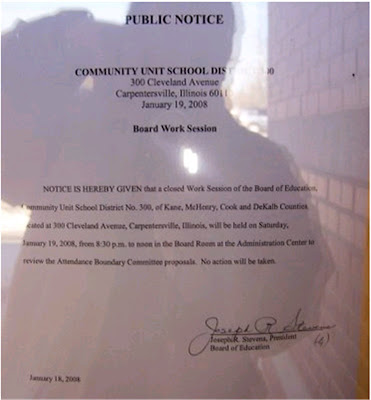 I got this call from Stan Gladbach Saturday morning. He told me he was out shopping, but had wondered why District 300’s web site had said that a meeting on school boundary changes was closed.

My advice was just to go knock on the door, then, walk in, since discussion of boundary changes wasn’t one of the exemptions to the Open Meeting Act that I remembered.

Before people started walking out and he went in, Gladbach took a picture of the meeting notice on the closed door.

Click on it and you can see that it is

“a closed work session of the Board of Education…to review the Attendance Boundary Committee proposals. No action will be taken.”

Gladbach called me back after he entered the room, where the meeting seemed to have been adjourned, but board members were still talking.

Lots of people were in the room, including Jameel Naqvi, reporter for the Daily Herald.

As we were talking, I pulled up the meeting’s agenda, and, lo and behold it says,

”NOTICE IS HEREBY GIVEN that a closed Work Session of the Board of Education, Community Unit School District No. 300, of Kane, McHenry, Cook and DeKalb Counties, located at 300 Cleveland Avenue, Carpentersville, Illinois, will be held on Saturday, January 19, 2008, from 8:30 a.m. to noon in the Board Room at the Administration Center to review the Attendance Boundary Committee proposals“ (emphasis added).

Just like the lack of notice of the April 21st McHenry County College meeting last spring kept me at home one night last spring.

So the sign on the meeting room door, except for a typographical error on the starting time (PM, instead of AM) is in sync with the district’s web site notice.

Back in September, District 300 won a “Worsty” award from Associated pres. What’s the award for?

“When public officials refuse to release public documents, and when government bodies meet privately for inappropriate reasons, the IPA takes note. The idea behind the Worsty Awards is to call attention to these “worst” abuses in an effort to discourage them.”

Gladbach has been following the school boundary issue, attempting through Freedom of Information requests to obtain demographic data about families that will be put in each of junior high and high schools.

So far, he hasn’t gotten information in a format that is useful.