I could probably cover this meeting in one article as reporter David Fitzgerald of the Northwest Herald did, but why waste good notes.

The first notes I took at the Carpentersville School District 300 meting with legislators were of Superintendent Kenneth Arndt stating “the focus can now be on curriculum and instruction.”

But, as might be expected, most of the points made by staff and advisory committee chairmen were about money.

School districts basically just want to be left alone…except when they want money and don’t want to ask voters for more.

Arndt was bold enough to lay out some criticism found in the district’s 10,000-person (employees, parents, graduates, etc.) survey last year. I jotted this conclusion from the ones filled out by recent graduates:

“We felt that we were a little bit behind classmates…kids from all over the world.”

Funny thing. I had the same feeling when I competed against graduates of higher ranked high schools than Crystal Lake’s way back in 1960 at Ohio’s Oberlin College.

lso pointed out was the need “to put more emphasis on preparing out minority students (for higher education).”

Chuck Chorba, Community Building Committee Chair, led the charge for money by pointing out that the recent $185 million referendum was predicated on the premise that the state would cough up $30 million. None of that has come.

As a direct result, Chorba said, 30.5 % of the middle school students are still in trailers. He called them “mobile classrooms.”

Unstated was that the new Hampshire High School will have oodles of empty space.

I’m not sure whether it was School Board President Joe Stevens or board member John Ryan, who chaired the meeting, but one pointed out that the delay will result in costs of $6 million more.

$2 million of inflationary costs and $4 million in interest because more money will have to be borrowed than predicted.

State Senator Pam Althoff (R-McHenry) picked up on this as a prospective talking point in Springfield. 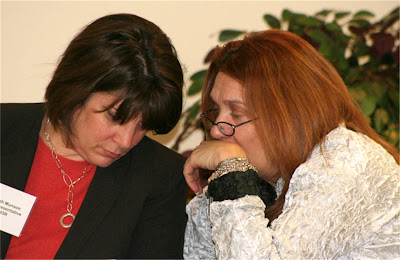 Althoff was the only one of three state senators representing parts of District 300 who attended the meeting.

Chief Financial Officer Cheryl Crates replied that the “growth is still going to happen, but it will push out (and, here, I can’t remember whether she said) 2-3 or 3-4 years. It’s way past business hours, so maybe she’ll email me with the correct figure and I can take the other one out.

In any event, a guy in the back interjected that growth next year will be 1-2%.

= = = = =
In the top photo, Northwest Herald reporter David Fitzgerald interviews State Rep. Mike Tryon as State Senator Pam Althoff looks on. District 300 Superintendent Ken Arndt is in the head shot on the upper left. Community Building Committee Chair Chuck Chorba is seen facing right in the other head shot. District 300 School Board President Joe Stevens is seen talking to those assembled with school board member John Ryan listening. At the bottom, State Senator Pam Althoff confers with State Representative Ruth Munson about a point being considered at the breakfast.