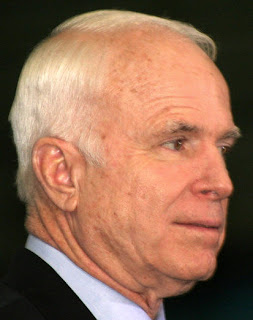 I think the last time I supported someone who won a contested Republican presidential primary was 1980.

Twice in a lifetime isn’t bad, is it?

Some of my conservative friends can’t understand how I could have supported John McCain last Tuesday.

They have a litany, most of which I can identify with.

I have to admit I was undecided at McCain’s rally Friday a week ago.

And, if the media had continued ignoring Ron Paul, I was prepared to have voted for his smaller government candidacy.

But the Left Stream media didn’t mistreat him too badly, so I voted for McCain. 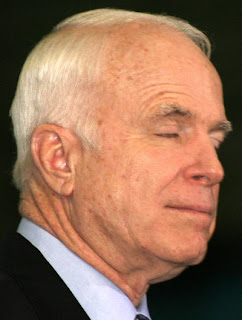 I find that I have bonded emotionally with McCain.

That has never happened with me with any candidate before.

It comes on two planes.

About a year ago, because of my writing of McHenry County Blog, Dave McSweeney invited me to sit in a room with other conservatives for some give and take.

Without going into details, McCain’s worldview is similar to my own. We are all put on earth for some purpose. McCain didn’t know whether serving as United States senator had fulfilled his mission. 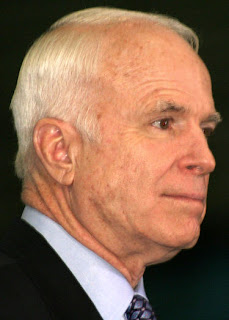 If so, that was fine with him.

If not, he was willing to offer himself as a presidential candidate.

His did not seem to be on an ego-driven “mission from God,” to put in the language of the Blues Brothers. But he was willing to go God’s will, whatever that turned out to be.

When the tough questions were asked, I might not have agreed with where his logic took him, but there was logic.

At the press conference after the conservative inquisitors dispersed, McCain backed President George Bush’s surge in Iraq. I am sure the reporters thought he was committing political suicide, even though they were willing to give him some ink/air time. 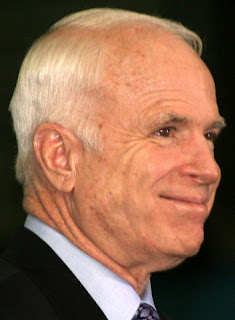 This was a candidate who clearly wanted to win on his own terms or not win at all.

To the conservative group, McCain also told the story of how a little girl from Mother Teresa’s Bangladesh orphanage became his adopted daughter.

At the rally, his wife Cindy told the story from her point of view. I took a series of photos while he was listening to her talk. I’ll try to fit them in this article from first to last.

Being an adoptive dad, I could relate to John McCain’s range of emotions, present even though it seemed obvious to me that this was part of the stump speech that was probably deliberately designed to help keep him from losing his voice during the campaign. So, I don’t find John McCain disingenuous like so many politicians, regardless of office sought.

I know, however, that I asked him if he would reappoint Patrick Fitzgerald as U.S. Attorney and he said he would.

From what Mitt Romney said, I have ever reason to believe that he would not have reappointed Fitzgerald.

Call me a single-issue voter, if you will.

That single issue is honest government.

One can only wonder what the corruption tax costs each of us in Illinois.l 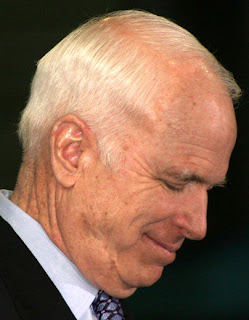 And, speaking of being misled, let me tell you a story about Jim Thompson.

I was enamored with his convictions of politicians, Democrat and Republican.

I was the second state representative to support his candidacy for governor. (The first was Rockford’s Tim Simms.) I gave him his first reportable campaign contribution the day of his fly around. I even bought saying “Thompson for Governor, Skinner for St. Rep.” I pinned them on everyone walking past the Republican booths at the Kane, McHenry and Boone County Fairs.

Jim was my last candidate for political hero. 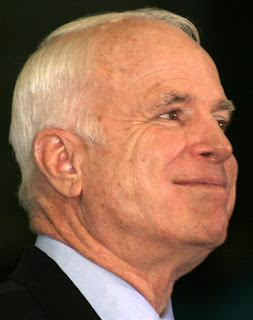 It was right after the election that the halo slipped.

I was listening to the radio.

I can even tell you where I was.

It was on the driveway at the north door of the State Capitol.

It was a beautiful day.

A radio reporter was asking Jim if he was going to keep Governor Walker’s Ford.

You may remember that Dan Walker was a man of the “p-e-e-ople.”

No limousine for Walking Dan. 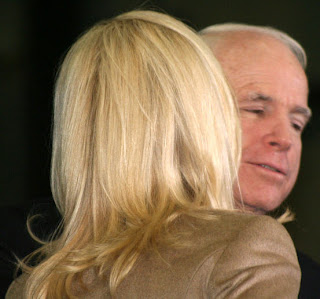 “No. What do you think this job is all about?”

After that I haven’t had any political heroes.

Not that McCain is a hero to me.

I’m past that stage in my life.

I just think he is the right man at the right time.

Forgetting the disagreements I have on domestic and social policy with Barack Obama and Hillary Clinton, I just don’t trust them not to give away the store in the international arena. 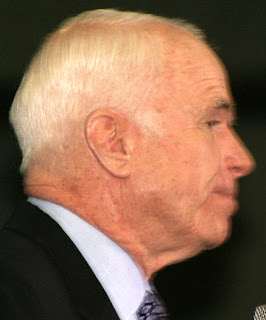 Someone pointed out that his law firm will make a lot of money if Fitzgerald indicts Governor Rod Blagojevich.

= = = = =
These nine photographs of presidential candidate John McCain were taken from the time his wife Cindi McCain starting telling how a little girl from Mother Teresa’s Bangladesh orphanage became his adopted daughter.

She is now a 16-year old teenager.

The last photo shows McCain about to return to political mode.

The picture of former Governor Jim Thompson was taken as he was leaving the rally stage after having been introduced for a second time, this time by McCain.