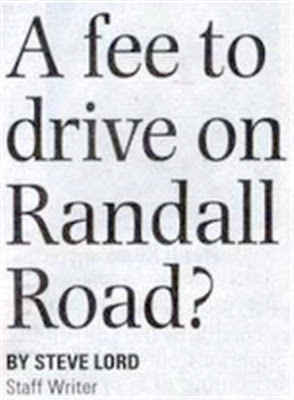 From the folks that brought us the 1974 RTA gas and sales tax comes the idea of turning Randall Road into a tollway.

It’s not bad enough that the Illinois Department of Transportation has built four-lane highways for less traffic than drives past our home in Lakewood every day.

Don’t know where Lakewood is?

It’s a suburb of Crystal Lake.

So desperate were McHenry and Kane County Board members to cope with congestion that they forced local taxpayers to pay an additional local motor fuel tax, a lot of which went to build that road. Property tax money was also used. And there was some state money provided.

The state should have paid for the whole road and it should be a state highway.

Compare the traffic counts on Randall Road to those on Route 67.

You know about the relative importance of Route 67, don’t you?

Well, if you have a kid at Western Illinois University, chances are that you have taken it. 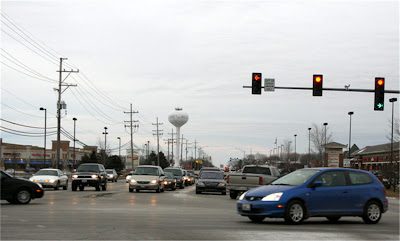 More cars go in front of my house every day than use parts of Route 67.

And many, many times more use Randall Road than use Route 67.

There are four-lane highways like Route 67 all over rural Illinois.

They were supposed to provide economic development, but four-lane highways were not needed to attract Motorola to build a now abandoned cell phone plant just north of Harvard.

Other factors are at work in plant location.

In any event, all the four-lane highways Downstate have not stopped its depopulation.

The Chicago Sun-Times reported Sunday and Elgin’s Courier News Monday that an outfit called the Metropolitan Planning Council want to meddle in the Fox River Valley beyond their support of the April 1st imposition of another half cent sales tax on every dollar.

Here’s the headline that caught my attention:

That coming sales tax hike is supposed to bail out the RTA and the CTA with half originally going to help us build roads the state refuses to take proper responsibility for.

Now these geniuses, most of whom probably could not even find Randall Road, want to impose “congestion pricing.”

This group of meddling city folk and limousine and railroad liberals don’t want to raise taxes.

They just want to charge people more money if they go to work when ordinary people go to work.

They call for “user fees.”

If they succeed, every time you pay your “user fee,” repeat after me,

Of course, neither is a toll a tax.

Or, as regional policy and transportation director Michael McLaughlin told the Sun-Times:

“User fees are an honest tax, because you know what it’s going for.”

That would have meant you and your organization weren’t hypocritical.

= = = =
Please do not confuse this article with this earlier one.