Board President Mike
Zellman appeared at the Crystal Lake City Council meeting on Tuesday with the request that discussions begin on the topic of making the two-member board a three-member board.

After Councilman Ralph Dawson said, “I see no problem,” Councilwoman Ellen Brady Mueller cut right to the heart of the matter:

“I think the agreement works fine.

“There was a time when the park district had control and it didn’t work.

“The thought is the park district conspiracy theory is to remove the power boats from the lake.”

“There were buoys in the middle of the lake,” she remembered.

“I whole heartedly agree with what you are requesting,” Dave Goss said.

“I think the flooding and the agreement to shut down the lake shows it’s not working. The lake is park district property. (The park district police police) every piece of property except this.

“We were in high school,” Brett Hopkins pointed out in reference to the time when buoys divided the Crystal Lake side of the lake from the majority of the usable part of the lake, which is located within the Village of Lakewood’s boundaries.

“For me, I think it would be prudent to discuss it,” he continued.

“I’m not opposed to discussion,” Cathy Ferguson said. “I am opposed to making you part of the agreement. I believe the City of Crystal Lake and the Village of Lakewood have rights vested by matter of ordinance.

Councilman Jeff Thorsen said he was “not opposed to discussing (the issue),” that it “may call for a seat at the table.

“We have been operating on a very fragile day time (use) of the lake. We don’t want to upset that. I think it’s almost counter intuitive to cut any of (the the three out),” he added.

“I don’t think there is a person in Crystal Lake that wants to get back…to the feud,” Mayor Aaron Shepley said. “I think a lot of the issues at the time were personality driven.

“I believe they have a right to be a part of that lake safety agreement.”

Then, Shepley tried to dispel the long-standing fear of Country Club Property Owners Association residents in both Crystal Lake and Lakewood that the Crystal Lake City Council and the park district would gang up on Lakewood to the detriment of the people who have paid big money to live where they can dock or anchor their boats on Crystal Lake.

The thinking is that since the vast majority of Crystal Lake residents are not boat owners and rarely use the lake that an “envy” factor might lead to banning boats, as previous park boards favored in the 1970’s. 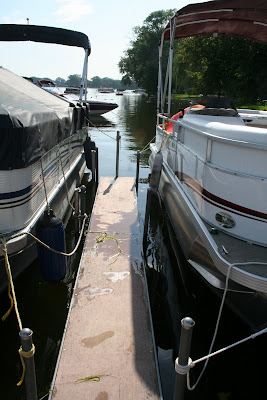 If you sense my family has a stake in the issue, you are correct. My parents moved us to Crystal Lake in 1958 in order to be able to have a motor boat on the lake.

“It could cut against us,” Shepley said.

“It can’t be a bad thing to have to have them at the table,” he continued.

“I am deeply disappointed at the way the lake safety ordinance has been enforced,” he said pointing to “160 warning tickets,” including ones for reckless operation of a watercraft.

“Do you want to ban power boats?” someone asked.

“That has never once been discussed,” Zellman replied.

“You don’t say things like that out loud,” Mueller interjected.

“It makes sense to have three parties on the committee,” Zellman continued.

“Has there been discussion of limiting (power boats),” Ferguson asked.

“One commissioner may have discussed limiting,” Zellman replied.

Referring to the institution of a no wake rule during August’s high water period, she askld, “If you were part of that agreement, how would that have changed that?“

She pointed out that there would have had to been three meetings, instead of two.

“They were driving water from the streets back into the lake,” Zellman said.

“Are you talking about what we (the city) was doing?” Mueller asked.

“That may have been illegal,” Thorsen added. “As far as no wake, we’ve addressed that already.”

“We did it,” Mueller agreed.

In what could only be interpreted as a veiled threat of a law suit from the park district, if it didn’t get its way on this issue, Shepley said, “Or the park district would have to evaluate their options.”

Remember, earlier in the meeting Shepley, an attorney, said he thought the park district had a right to be on the lake safety agreement board.

Commenting on Lakewood’s pivotal role, Shepley added, “If they’re not willing to sit down, I don’t know where we go.”