It was a foregone conclusion that State Rep. Mike Tryon would replace McHenry County Treasurer Bill LeFew as chairman of the McHenry County Republican Central Committee.

McHenry Township’s Kathy Kuchta was, too. As was Chemung’s Glenda Miller.

But in the only contested race, 16-year conservative Crystal Lake precinct committeeman Fred Wickham won out over newcomer Brent Smith by a 2-1 margin.

“We are a new central committee and are in control of our own destiny,” Tryon stated in his acceptance speech.

“They’ll be Republicans in leadership come November,” he stressed.

He also recognized long-time committeeman Joyce Story for offering to donate her liver for a transplant.

He thanked his supportive business partner Preston Rae, who also serves as Alden Township Supervisor and its precinct committeeman and his wife.

He then asked for the meeting to be closed.

It was a full house. Only 43 elected committee were absent.

Two other officers were elected without opposition:

Entering the VFW in Woodstock committeemen were greeted by Young Republicans passing out an appeal to support Smith for central committee treasurer.

The balloting for the treasurer spot was by paper ballot, instead of an oral roll call.

Committeemen had to write their precinct number, their name and the name of their candidate on little slips of paper.

Smith went first, admitting he was a little tongue tied.

Smith recounted the volunteer work he had done for all sorts of local candidates as far back as Dick Klemm.

Wickham told of having been a treasurer for a political action committee and his desire to “work with Mike to heal the Republican Party.

“We need to bring people together.”

He said that the “financial records should be open. You should be able to get that information anytime you want it.”

He promised that expenses and revenue would be reported for each event.

Both candidates had watchers, so the candidates could get some idea if those who had pledged their support had kept their commitments.

The two doing the tallies were using electronic calculators with no paper trail.

Counting the votes took longer than it would have had the two people doing it had tapes to compare.

After the meeting, Smith congratulated Wickham.

Otherwise the meeting ran smoothly with the exception that moderator Bernie Narusis put me in a “penalty box,” as Nick Provenzano observed.

He named me parliamentarian and made me sit on the stage.

I told Bernie, who ran for state’s attorney in 1964 while my father was running for county auditor, I wanted to take pictures.

Bernie said I would have a good view from the stage. 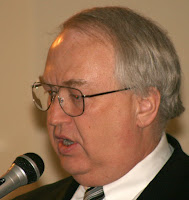 Outgoing GOP Chairman Bill LeFew made what turned out to be virtually a cameo appearance.

“It’s been a pleasure, I’ve enjoyed,” he said and apparently left the meeting. He certainly was not in the room when Wickham told of it having been a pleasure to work with him.

After the meeting, it was learned that new by-laws were adopted.

Power, which had been concentrated, was dispersed.

There will henceforth be regular meetings.

= = = = =
Newly elected McHenry County Republican Central Committee Chairman State Rep. Mike Tryon can be seen in the sights of a newspaper camera woman standing next to his newly elected Vice Chairwoman Kathy Kuchta. Next is a head shot of the new treasurer, Fred Wickham.

An audience picture shows how full the room was. Newly elected secretary, Glenda Miller and vice chairwoman, Kathy Kuchta are seen in head shots. Below you can see Young Republicans handing out a leaflet supporting Brent Smith for committee treasurer. Underneath you can see Brett Smith on the left with Wickham next to him. The vote counting committee and watchers for Smith and Wickham are in the next shot.

You can see Smith congratulating Wickham below. That’s me holding up Robert’s Rules of Order. Moderator Bernie Narusis congratulates Mike Tryon down on the left. Finally, a head shot of outgoing GOP Committee Chairman Bill LeFew.

Since there is some more space, I’ll add a picture of Steve Verr of McCullom Lake getting his ballot. That’s outgoing Vice Chairman Rich Mack next to Verr. Mack chaired the bylaw revision committee. Lou Anne Majewski can be seen at the bottom delivering her nominating speech for Fred Wickham.

There were non-committeemen county officials present. I wanted to take a photo of Phyllis Walters, but she didn’t want me to. McHenry County State’s Attorney had no objection as he talked to Algonquin precinct committeeman Patrick Colcernian before the meeting.