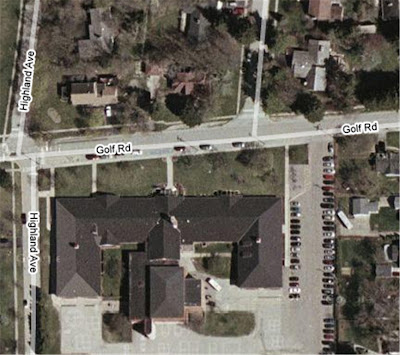 Three days this past week, Crystal Lake’s South Elementary School parents have gotten illegal parking tickets on Golf Road in front of the school, Highland Avenue east of the Dole Mansion and Spruce, which is unmarked on this map, but runs north from the east side of the school.

A Crystal Lake policeman in an unmarked black car parked in a private home driveway across from South School was walking up and down Golf Road putting tickets on windshield on the north side of the street. Unfortunately, I didn’t have my camera any of the three days.

Friday morning there was a Pella Window semi parked right across the street from the school. After I dropped my son off, stopping briefly in the street, I saw the policeman walking up to the big truck. He had already given tickets to every car on the north side of Nash Road.

I did have a camera one afternoon when he wasn’t there. 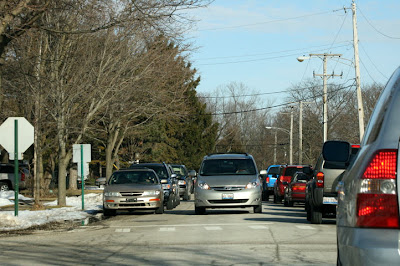 You can see the congestion. All the cars on the left are parked illegally and, on Friday, all the ones there got tickets.

Not strange at all is the fact that the parents figure out to pick up their kids when a policeman is not around.

Traffic is congested, but the job gets done.

I’m sure someone familiar with chaos theory could explain why that happens.

You can see how narrow the roads are, how deficient the spaces for parents to pick up their children.

You may remember that I got a ticket dropping off my son last year.

I pulled into the empty handicapped parking places right in front of the front door and was told to move on.

I pulled out onto the street a couple of car spaces, stopped and let my son out of the car. He didn’t go fast enough.

The policeman, obviously thinking was deliberated disobeying him, came up and gave me a $10 ticket. (See “I, Scofflaw.”)

This year’s policeman also issued tickets on Highland and Spruce.

There are “no parking” signs, of course, on all of the locations where the policeman was writing tickets, but what alternative do parents have?

“Where are they supposed to park?” one observed asked in disgust.

I can tell you.

They can continue driving around the block when a policeman is present until they find an empty spot in front of the school. That’s what I do. I have had to drive around the block as many as five times if I come too early.

I’ve told my son not to expect me until at least ten minutes after school lets out. 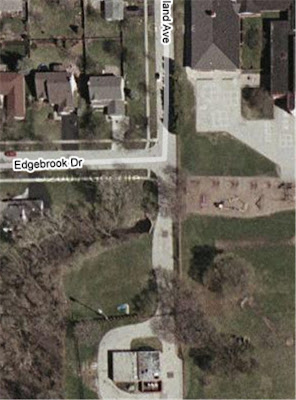 Last year, I asked a policeman issuing tickets—maybe the same man who was out there this week—how people were supposed to pick up their kids.

He told me that there were plans to build a circle behind the school in front of the well at the end of Highland Avenue (the street that goes on the west side of the school).

Not good odds that it will be built before my son goes to Bernotos Middle School.

But, I know what parents will be talking about at the South School Fun Fair today.

They will be talking about how ridiculous it is to harass parents trying to pick up their kids after school.

Here’s what District 47 did for West School: