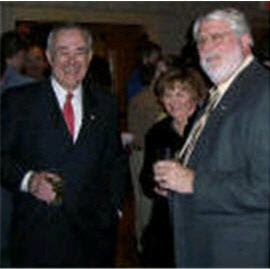 He ended Thursday’s time on the witness by admitting he was a “Lobbyist” with a “capital ‘L’” and that he had hired Chicago Democratic ward committeeman Ed Kelly to be “the small ‘L,’” as the Chicago Tribune’s Rezko Blog put it Friday.

Monday the same Tribune source told about Ladd’s meeting defendant Tony Rezko for an October 2003 breakfast at which Rezko said virtually nothing.

Ladd was trying to figure out what Rezko’s role was in the Mercy Hospital licensing, as well with other clients before the Illinois Health Facilities Planning Board.

Rezko’s silence led to the hiring of Chicago Democrat Kelly for $80,000.

Ladd’s characterization of the meeting:

“It was significant to me because of what did not get said. I would have thought I would have heard Mr. Rezko say to me, ‘I don’t get involved in these matters, why are you talking to me?’  Or he might have asked me some questions about these applications. The fact that he said neither indicated to me he was a blank slate and I had to go further [and hire Ed Kelly],”

= = = = =
The picture, again, is of Jeff Ladd and Ken Koehler at a Republican Party event. It comes from the McHenry County Republican Central Committee web site.