Yesterday, I wrote about the 75% sales tax hike that the Crystal Lake City Council passed Tuesday night after giving the public only one week’s notice.

You may have missed the article because at midnight Tuesday night, I posted it under the “Message of the Day” for Tuesday, rather than under Wednesday’s (ALAS). It focuses on Mayor Aaron Shepley’s summation of the case for making Crystal Lake’s sales tax rate as high as Algonquin’s.

Today, I’ll lay out what those who voted “Yes” said.

It didn’t take a lot of time, so I was furiously taking notes and didn’t get many photos.

First up was Ralph Dawson.

“This is going to be tough selling this to the public,” Dawson said. “Yes, it is.

“What will this do to Crystal Lake? People want a quality of life,” he continued.

“If we can improve our police department…

“The railroad tracks are stopping all development on Main Street.

“Vulcan Lakes. That has been a buzz word. They want Vulcan Lakes as recreation..

“Our lake (Crystal Lake) has become very restrictive. It is at its maximum,” Dawson said, pointing out that many people could make use of Vulcan Lake.

“It’s going to cost us a lot of money.

“Everything in this tells you to say, ‘No.’

“I have to support this to keep this city where it is right now. It’s a great city,” he concluded. 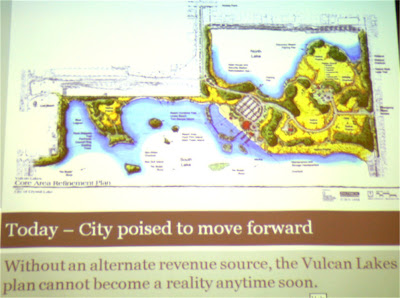 Referring to the Vulcan Lakes development, she said, “There is no other way to pay for it.

“If truly it (low) sales taxes (encouraged people) to (come to) town, all the business would be in Crystal Lake,” she continued.

Mueller pointed out that two years ago Algonquin had increased its sales tax to the level in the motion being considered and “they continue to develop. So, I think this is a much better alternative than raising the (property) tax.”

Next, Dave Goss was short and sweet:

”Look forward five years and see what will be requested, the amount of money we’re going to have to put into infrastructure.

“I expect to be able to all of that with the sales tax.”

“No decision has come (harder) for this council. (It’s) different when (you) look at…things as a whole.

“We had a strategic planning meeting. It took a long time for that plan to reach fruition.”

She went on to explain what the council had “explored.”

“We did have discussions with the Conservation District about Vulcan and they turned us down.”

(I have to say that I never got wind that the city was talking to MCCD. )

Ferguson went on to talk about “private-public partnerships.”

“People are saying why should government subsidize private business.

“I think we need this tax to keep moving. We need to keep our amenities so people will continue to want to live in Crystal Lake.

“I am reluctantly, but I am in agreement with this proposal,” she concluded.

Brett Hopkins, the newest member, was last to speak before Mayor Aaron Shepley (whose comments appeared in yesterday’s story).

He keyed in on three topics:

2- Roads and infrastructure, and

I caught part of a thought only about the Tax Increment Financing districts: “I think if we took the TIF money…”

“Maybe part of the problem is that we’ve been doing nothing.

“(Time to) take some of that money and invest it in Crystal Lake.”

“You have every right to be angry at me personally,” he said. “Don’t be angry at the merchants in Crystal Lake.”

Next up was Shepley, who started off by saying,

“Don’t take all that on yourself”

= = = = =
The city council members who supported the tax increase are seen on top of the article. On the first line are Dave Goss, Ellen Brady Mueller and Ralph Dawson. Below them are Brett Hopkins and Cathy Ferguson.

One of the sales tax hike justification slides about Vulcan Lakes is shown at the top of Ellen Brady Mueller comments.

There is a map of the McHenry County Conservation District’s sites above Ferguson’s comment about Crystal Lake’s having approached the MCCD. You will note there is nothing but a bike trail in or near Crystal Lake. Read about the $90,000 that Crystal Lake got from the $68.5 million bond issue of the early 2000’s. Ask them how much of the $73 million bond issue passed last year will make it to Crystal Lake Grade School District 47 territory.