You got a foretaste of that possibility in this February 12th article. 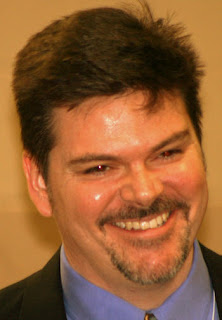 “We’re the majority in McHenry County,” Cynor asserted, as he explained why he wanted to be the candidate for and, “ultimately, state’s attorney.”

He currently works for McHenry County government answering legal questions from judges in the 22nd Circuit Court. If he worked for the state or the circuit, he would have to resign his job to run for a partisan office. Not so, he explained, as long as he is on county government’s payroll.

He has fifteen years as a litigator after graduating from the University of Illinois Law School. He worked for Kemper Insurance as an asbestos litigator, supervising attorneys around the country.

He also has served as Livingston County Public Defender, a Special Prosecutor for that county and prosecutor of Washington Park. 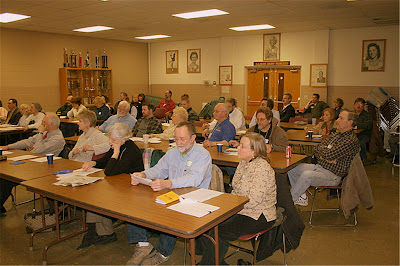 “In a county the size of 300,000, the state’s attorneys here no longer try cases,” Cynor explained. “They are adminstrators.

They need to “recognize good litigators and hire good folks.” 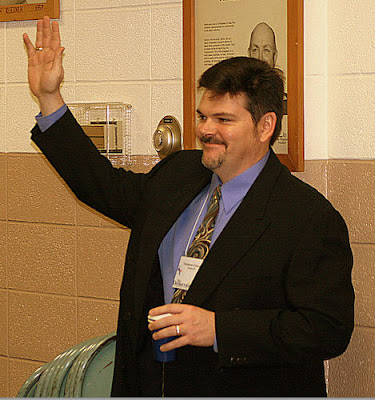 “That, folks, is where the current state’s attorney has fallen down mightily.”

Cynor said that a reporter in the room had found 125% turnover in three years.

“What kind of efficiency, accountability would you have in your business (if your turnover were that high)?

“We have put political patronage first and foremost in a role that should be supremely public service.

“We have not (so far) been able to master a two-party system in McHenry County,” Cynor said, clearly indicating that he intended to change that situation.

Julian has been in the industry for 20 years, opening his own agency in 2002. He lived for 13 years in Crystal Lake and 9 in Woodstock. He earned an MBA while living in Michigan.

He has served on District 200’s boundary review committee, is treasurer of his church, is secretary of his Boy Scout troop (I think), and has volunteered at PADS for 3 years.

“My allegiance will be to the people of McHenry County,” Julian said.

Two women stepped forward to run for the McHenry County Board against the two Republican men who were unopposed in the February 5th primary election.

Harmon works for American Commercial Realty handling a number of duties, beside her four children. At the office, she is involved in site development, property management, condominium associations, the budget and supporting 17 “very active agents, ten full-time.” She has lived in the county eleven years and worked previously for Baxter and Woodman as a project manager coordinator.

Harmon seeks to have “our board take on foreclosure” by counseling homeowners.

She likes the way the county board has put the budget online and “the minutes online almost on time.”

“I’d like to see the county be more conservative.

“If we can have a moderate McCain, we can certainly have a conservative Democrat.”

After sitting down, she remembered she had not mentioned her military background. She said that meant she knew how to manage.

Mawhinney said she hadn’t prepared a talk, but, by way of background, she had worked at Oakton College before retiring. I think she said she was a student development officer.

“I’m a good listener, a good communicator,” she said.

“For over twenty years I’ve been going to the polls and haven’t had a choice.

“I believe people need a choice.”

Her husband is Rich Jackson, an attorney who has run for countywide office as a Democrat several times.

Below is a head shot of a smiling Cynor, a picture of most of those attending, an acknowledgment of his slating by Cynor, head shots of Julian and Harmon, Mawhinney and Harmon after the four or five District 2 precinct committeemen voted to nominate them for the county board and a head shot of Mawhinney.