Warning: Parameter 2 to wp_hide_post_Public::query_posts_join() expected to be a reference, value given in /srv/users/serverpilot/apps/wordpress/public/wp-includes/class-wp-hook.php on line 292
 Bike Path from Oak Street to MCC Gets Approval - McHenry County Blog ↓
McHenry County Blog Home 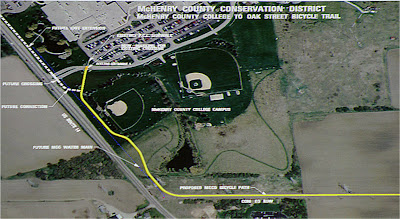 Indeed the $90,000 parking lot dedicated to bike riders are Oak Street north of Crystal Lake where it crosses the main line of the Union Pacific Railroad line is all the District 47 part of Crystal Lake got back from the $68.5 million bond issue. Look here for where the rest of it went.

And last night John Kremer appeared before the McHenry County College Board asking permission to build the bike path from the Commonwealth Edison right-of-way from Oak Street to Route 14 so that it will end at the south parking lot where the athletes cross the entrance drive.

Kremer noted that Illinois Department of Transportation plans to widen Route 14 are scheduled for 2014.

It is impossible not to note that the minor league baseball stadium would have been in operation years before that widening occurred. And, in 2014, Rod Blagojevich intends to be in his third term, assuming he is not in jail.

Kremer also pointed out that the bike path will use of one-fourth of an acre of MCC’s impervious surface.

“Nothing we can do about that,” the MCCD official said.

Trustee Scott Summers wondered if the internal MCC bike path completion could be coordinated with MCCD’s. 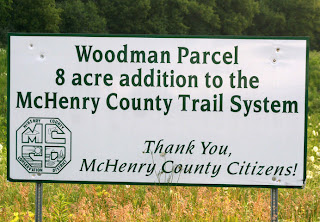 MCC Board President George Lowe pointed out that the bulge in the bike path along Route 14 was because IDOT plans to put a retention pond there.

Lowe kidded board member Donna Kurtz that she would have to ride her bike to board meetings. Kurtz said he would. Presumably, she would not have to park her car in the parking lot where you see the “thank you” sign above.