The St. Louis Post-Dispatch’s Kevin McDermott reported the following, which certainly adds flavor to the soup:

“‘Our last governor is sitting in a federal penitentiary. Our current governor is mired in a number of federal and state investigations,’ Rep. Jack Franks, D-Woodstock, the measure’s sponsor, reminded House members.”

Sponsored by Marengo’s Democratic Party State Rep. Jack Franks, the measure faces an uncertain future in the state senate because Senate President Emil Jones (D-Chicago) is pretty much locked at the hip with Governor Blagojevich.

It’s hard to find someone who thinks the proposed change in the Illinois State Constitution will be called for a vote. If called, however, it would go directly to the voters, because Illinois governors have no role in the approval process. 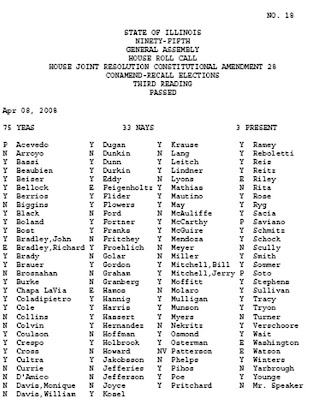